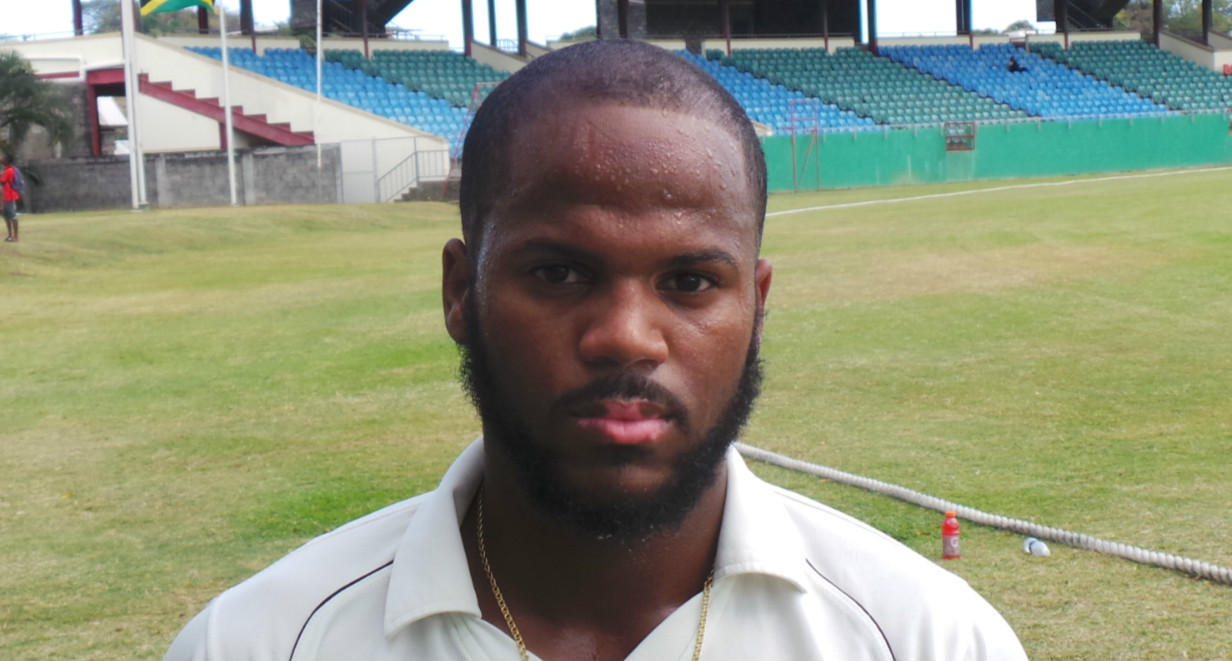 Jamaica allrounder John Campbell became possibly the first player in regional cricket to score a century and a half century and take 5 wickets in the same match, a feat accomplished the at the Arnos Vale Playing Field on the weekend.

Campbell, a former West Indies Under 19 player, had scores of 135 and 83* against the Windward Islands Volcanoes and took 5/106 in the second innings to power his team to a comprehensive 9-wicket victory in the PCL match March 11-14.

Opening the innings, Campbell, a 22-year-old left-hander, powered his way to a commanding century made on a pitch that offered some turn but was slow for the most part.

“It was hard to drive on and it was keeping a bit low at times. You had to move towards the ball to get to drive and even today still (fourth day) it is still not easy to drive. But I will still say it was a good wicket,” he said minutes after lashing the winning boundary.

In the first innings, his 135 came 267 minutes off 192 balls with 15 fours and 2 sixes. He featured in three half century partnerships — 72 for the second wicket with Barbadian Kirk Edwards (24), another 58 for the third wicket with Andre McCarthy (20), and a further 53 with Jermaine Blackwood (27).

Devon Thomas (122) and captain Paul Palmer Jr. (82) then added 177 for the sixth wicket to see the Scorpions to their big total. Delorn Johnson 4/84 was the Volcanoes best bowler, while Liam Sebastien got 3/113.

The Volcanoes were then dismissed for 233 with Sunil Ambris’ even 50 being the topscore. Debutant Gidron Pope was bowled for 14 by Nikita Miller, while talismanic player Devon Smith (26) ran himself out attempting a third run on the second afternoon.  Damion Jacobs finished with 5/95 and Miller 4/90. It was when the Volcanoes were asked to follow on that Campbell stole the limelight with the ball with 5/106 in 37.1 overs in bowling them out for 350. Devon Smith lead the way with 126, Jelarni Robinson 64, Liam Sebastien 52* and Kavem Hodge 45. Smith and Robinson added 131 for the second wicket taking the total from 46/1 to 177/2. Smith batted 283 minutes faced 270 balls and struck 8 fours.  Set 138 for victory, Campbell and Shacaya Thomas (52) made light work of the target in adding 133 for the first wicket before the latter was caught behind off part-timer Tyrone Theophile . But a boundary by Blackwood and a ruthless flat-batted six in the Mike Findlay Pavilion by Campbell ended proceedings.

The feat by the Jamaican opener of scoring 135 & 83 saw him compiling the highest aggregate of runs (218) by a player batting two innings at the 44-year-old Arnos Vale Playing Field, going past Trinidad and Tobago’s Larry Gomes. Gomes, a left-hander like Campbell, had scores of 116* & 70 (186) against the Combined Islands in the 1980 Shell Shield season. And while Gomes was bowled by Dereck Parry in his second innings attempting a back-foot drive, it is the view of many that were it not for such a small target, Campbell would have easily registered a century in each innings. Such was his confidence and talent.

Barbados and West Indies champion opener Desmond Haynes with his 203* against the Windward Islands in the 1995 Redstripe Cup holds the record for the highest individual score at the ground.

Campbell attributes his achievement with the bat to doing a lot of work in the net.

“I always felt comfortable and confident when batting in the nets and I knew it was only a matter of time before the runs would come”.

He underlined his confidence by reverse sweeping legspinner Keron Cottoy for 4 to bring up his 50 in the first innings before launching offspinner Liam Sebastien over long on for a big 6 to bring up his century — moving from 97 to 103.

With regard to his bowling, Campbell said that he never got the chance to bowl that long as “the other bowlers were doing the job”. He said he just put the ball in the “right areas” and was rewarded.

“I feel really happy that my performance was good enough to give the team a win and I hope we can put the bad times we had with the bat behind us now move on from this match,” the soft spoken opener who also took one catch in the match said.

The win pushed the Scorpions into third on 82 points, while the Volcanoes are in the cellar position.