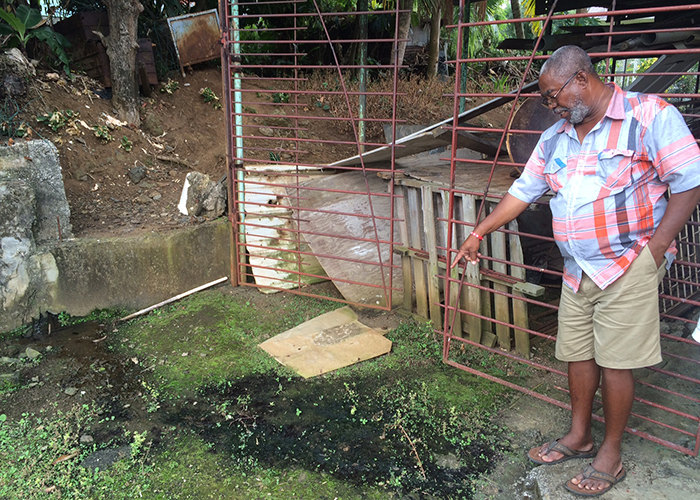 Stephen Pollard points to water in his yard, which he says is seeping through from Pile’s property. (IWN photo)

A resident of Fountain has threatened to beat the owner of a neighbouring property whose business he says is the cause of a longstanding wastewater problem at his home.

The businessman, however, is accusing the resident of bringing his reputation into disrepute and is threatening to sue.

The resident, Barbadian Stephen Pollard, who is married to a Vincentian, told iWitness News on Wednesday that he has repeatedly complained to businessman Trevor Pile, who also has Barbadian roots, about the problem.

iWitness News visited the Pollards’ property last week Wednesday, where he showed us pooling of water along the foundation of the wall separating Pile’s property from his.

There were also signs that the water was seeping into the Pollards’ yard.

Pollard said the situation is such that his 4-year-old grandchild is told never to go to that section of their yard.

“I tired going to the public health inspectors…” Pollard, who began constructing his house about 10 years ago told iWitness News, adding that the problem has been going on for years.

“This thing here, it is getting me to the point where I feel I going hurt Mr. Pile if I can’t get redress here. I going let the system hurt me after I hurt Mr. Pile,” Pollard said.

Pollard, 63, said that during one of his visits to the health department, a health inspector, who has since retired, “was interrogating me about the description of that water”.

“I said, ‘I never went anywhere and study health work, but I know that is water’,” Pollard said, recounting his conversation with the health inspector.

“From Monday morning, from the time they come and they start working here, water comes up. It does come out through the little holes in the concrete, and this does flow out on a daily basis,” Pollard said, pointing to the water in his yard.

Pollard has dug a trench to construct a retaining wall between his property and a vacant plot nearby, but says water from Pile’s property flows into the trench.

He said he was tired of going to the health officials.

“So I say I am not going back. I going on the radio, I going to the media, I going to who I know would hear what I had to say because I know if this had happened in Barbados, Mr. Pile would have some serious licks,” said Pollard who lives part of the year in St. Vincent and the rest in Barbados.

“A peck stick would get lick off the peck and Mr. Pile would get some serious blows across he head and I would be in jail. But I do not know the conditions in St. Vincent pertaining — but I know no person’s wastewater should run on another person’s land,” he said.

He also told iWitness News that he will write to the Minister of Health and also seek legal advice.

“And if I can’t get redress here on our land, they going redress me somewhere out Belisle. I will eat some free food out Belisle,” Pollard said.

But Pile told iWitness News on Monday that he has rerouted the wastewater from his property to the front of his building.

He said the wastewater of which the Pollards complain is actually coming from another neighbour’s property.

He accused the Pollards of undermining the foundation of the retaining wall on his property when they were preparing their land for construction.

Pile said that Pollard has been blasting his name across the country and said that if this continues, he would take legal action against his neighbour.