Get serious about praedial larceny 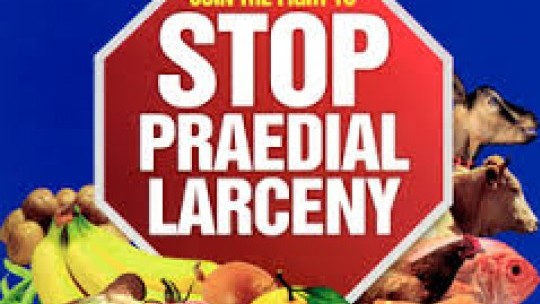 The issue of praedial larceny is one that has been haunting and breaking the back of our farmers for decades. I know of an actual story where a perpetrator was taken to court and convicted for stealing a farmer’s produce. He was ordered by the court to pay a sum of money. He went and stole produce from the said farmer, sold them and paid the farmer from his “earnings”. The truth is, praedial larceny is not only hurting the farmers, it is also hurting every community, the country’s economy and hence our very development. Praedial larceny retards our economic advancement.

There are laws to deal with praedial larceny and its culprits. However, leniency from the victim, the court and mediocre penalties have done nothing but prolong and escalate this terrible practice. One way of addressing the problem is to have buyers recording the farmer’s name and identification number using the “farmer’s ID’ card, the produce type and amount and having the farmer’s name and signature on such document. A buyer who fails to authenticate the legitimacy of his transaction by his or her inability to produce this document if and when ask to do so by the police would be in breach of a regulation. It means that if such regulation is not in place then it should be.

The appropriate framework must be put in place to combat this problem. The rural constables who are especially assigned to deal with praedial larceny (no disrespect to anyone, their training or lack of it), do not command the respect needed to execute their duties effectively. If they are not regular police officers then their duties must be spelt out clearly. If the calibre of officers used in this department is to juxtapose the government esteem of agriculture then we are surely awaiting the official obituary of this vital industry.

Austere examples must be made of those, regardless of stature, who are caught purchasing produce illicitly. If the laws are there, then the vanguards of our judicial system must do everything to enforce them with maximum efficiency. A perceived weak judicial system that seems only to dishearten farmers would deepen the stigma attached to agriculture in our country and promote praedial larceny. We will continue to lose our farmers. The implications of this could be catastrophic. Effectively dealing with the issue of praedial larceny is one way of boosting our agriculture sector. An effective plan would not only stem praedial larceny but it would also ensure the farmers are respected which in turn would attract persons, especially the young, to join their ranks.

Things As I See Them

3 replies on “Get serious about praedial larceny”