Who will save the coconut trees? 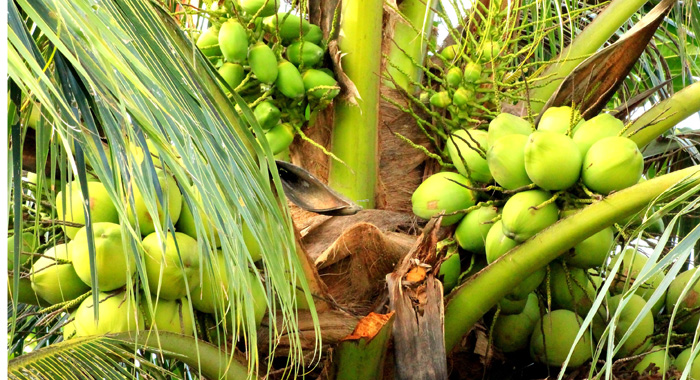 St. Vincent and the Grenadines was once the coconut capital of the Commonwealth.

Coconut oil and other coconut related products were vibrant and booming with respectable export figures to other countries in the region and persons saw coconut trees as money growing from the earth.

Today, however, coconut oil producers who are trying to revive a long-dormant industry are considering importing coconuts from Dominica for the sustainability of their enterprises.

The revival of the local coconut oil industry should be a national (and regional) imperative.

One way to ensure that we salvage what is left and enhance the industry will be to establish coconut forest reserves.

Just before I get into that, let’s get a little deeper into the history of the demise of the industry and its inherent problems.

According to a 1997 report by the Inter-American Institute for Cooperation on Agriculture (IACA), “Coconut production formed the base for one of St. Vincent and the Grenadines’ long-standing agro-industries — oil and fats extraction and processing.”

The report went on to state that “since the mid 1980s, however, the viability of the oils and fat industry has been greatly reduced due to significant reductions in demand for coconut based products in response to competition of ‘healthier’ substitute”.

“Falling prices for coconut oil induced declines in tree maintenance and copra production. Increased fragmentation of the large coconut estates and the debilitating effects of the spider mite and red ring diseases, were also serious constraints to the industries’ recovery,” the report added.

The report stated further that as a result of this, “between 1991 and 1995, St. Vincent’s sole factory operated below capacity, with output levels insufficient to maintain operations”.

Amidst all of this, there were still preservers of the coconut heritage who always refused to be deceived by widely accepted notion that coconut oil was less healthy than other oils.

Local politicians such as (then Senator) Selmon Walters continued to champion the cause of the revival of the industry in Parliament.

According to the Hansard of the Wednesday Dec. 9, 1998 sitting of the House of Assembly, Walters, debating the Budget, opined, “Mr. Speaker, if I go back a little bit to the coconut industry and the copra industry. Right through this country, Mr. Speaker, we have an abundance of coconuts. I realise that a lot of our farmers are wondering what are we going to do with all these coconuts on our hands. The traffickers would take some of it, but a very minor part, the majority of the coconuts; Mr. Speaker remains here, not being utilised.”

Persons throughout St. Vincent and the Grenadines, especially in the Garifuna Community (areas such as Sandy Bay), continued (as a tradition) their cottage-style production of coconut oil, mainly for domestic use.

The CARICOM regional transformation programme for Agriculture Strategies for the development of the Coconut Industry, (reporting the 2000 Agricultural census) stated that, a 39,478 coconut tress existed in St. Vincent and the Grenadines in compact plantations; Orange Hill estate, Hudley’s estate, Lowmans Windward and Spring.

There were also 32,126 coconut trees in scattered plantings.

Today, we know that trees still exist in considerable quantities in the Gorse, Richmond Vale and Mount Wynne areas also.

So where do we go from here?

Let’s take a look at the push to revive the industry. Private entrepreneurial citizens and entities such as Val Kelly Investments, Brio Che, Alex Phillips, persons in Sandy Bay, Georgetown, Belmont and elsewhere make Coconut oil for retail sale (but still on a small scale).

Many of them have labels and proper packaging, and others are emerging in that regard.

Their core challenges, however, remains the same, namely, the supply of coconuts locally, absence of machinery to ramp up local production, overall inability to meet growing local demand for coconut oil, as the oil has reclaimed its rightful place at leading oil, globally’ and, competing interests for the local coconuts. Private coconut farmers also suffer from praedial larceny.

From speaking to some of the producers, I’ve concluded that there are four winds pulling coconuts, locally. These are: the traffickers, the coconut oil producers, the bakeries and the sellers and bottlers of coconut water.

If we are to arrive at a stage where coconut oil can be competitively priced and readily available on supermarket shelves in both the extra virgin (cold-pressed) and “ordinary” versions, the issue of supply must be addressed.

One such way to do this is through the establishment of coconut forest reserves.

Where the state owns considerable amounts of coconut trees, an entity like the Department of Forestry can apply practices and techniques (employed in existing forest reserves), to keep those coconut trees in check, by designating areas with large concentration of coconut trees into “Coconut Forest Reserves”.

That entity can also be responsible for the selling of coconuts to oil producers, from those reserves, thus reducing widespread pilferage and arbitrary harvesting of coconuts in these areas.

This will also help in the maintenance of the trees, the identifying of pests and response thereto and the planting of dwarf coconut varieties to ensure supply is maintained and that the industry in sustainable.

This will mean income for the government, through coconut sales (locally and regionally), more employment for persons harvesting coconuts and caring for the trees and industry for the private sector who are buying the Coconuts.

CARDI and the CARICOM’s regional transformation programme for Agriculture Strategies for the development of the coconut industry, also have recommendations of their own to get the industry up and running again.

These include, provision of disease free seedlings to growers; the establishment and implementation of a program of incentives (subsidies, tax credits, etc.) to encourage rehabilitation and refurbishing and a review of the CARICOM Oils and Fats Agreement, including the CET on competing products.

The proposed Mount Wynne, Peters hope hotel development poses yet another threat to moves to get the industry up and running, too.

Hundreds of trees (mostly aged, but still of value) are expected to be lost as a result of this development.

This is another reason why urgency is needed in saving the other large concentration of coconut trees around the Island.

To conclude, I must say that the revival of the coconut oil and coconut products related industries is a key move in making right, a historical wrong and regaining employment and livelihood opportunities in the industry for Vincentians, especially in rural areas.

“Coconut reportedly has been proven to have no dangerous trans- fats, which are traditionally found in vegetable oils, margarines and shortenings” – the reports have said.

To conclude, Coconut oil as a part of our heritage is something we should be proud to hold on to.

Let us move towards preserving it fully.

6 replies on “Who will save the coconut trees?”