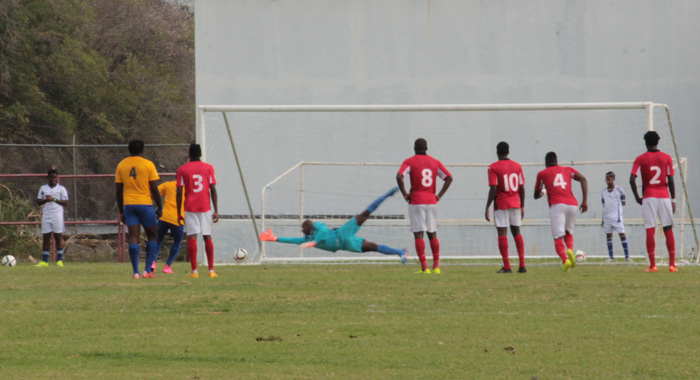 St. Vincent and the Grenadines Senior Men’s Football Team, “Vincy Heat”, pilloried and crucified following a 0-4 drubbing at the feet of Martinique in a friendly at the Victoria Park earlier this month, resurrected images of vintage “Vincy ball rolling” at the Arnos Vale Sports Complex on Friday (Good Friday).

This was the view of many, despite the team going down 2-3 to Trinidad and Tobago, “Soca Warriors”, in their 2018 World Cup qualifier CONCACAF semi-final round match in front of a large home crowd who turned out on the “Holy Day” to see a goal each from the Samuels — Myron and Shandel.

The crowd came out in droves to support their team and emphatically ignored an unpatriotic suggestion that they abandon the men, who for the most part, are children of the under-privilege and who wear the national colours with pride on any day of the year or hour of the day.

SVG took a deserved lead in the 45th minute when Myron Samuel clinically converted a penalty after goalkeeper Marvin Phillip was adjudged to have brought down David Pitt inside the penalty area as the UK-based striker left the Trinidad defence, not for the first time on the afternoon, trailing in his wake.

SVG should have taken the lead before then when Emerald George and Myron Samuel combined to split the T&T defence only for George to pull his shot wide with an advancing Phillip scrambling to close him down.

The near miss and the converted penalty had a telling impact on the afternoon’s proceedings as that silenced the traveling “Trini posse” who were predicting a 5-0 beating for “Vincy Heat” just prior to the start of the match.  The teams went into the break separated by that goal, with the visitors clearly bothered by the pace of the game and the humidity.

T&T had their chances, too when Aubrey David saw his steaming shot brilliantly saved by goalkeeper Lemus Christopher. Kenwyne Jones, who was kept in check all match by the towering Shawn Benjamin, also went close, but his low shot well saved by Christopher.

The Trinidad posse, however, were in real voice soon after the resumption as the Soca Warriors drew level when Joevin Jones curled a corner into the back of the net passed a leaden foot defence and a hesitant Lemus Christopher in the SVG goal.

The hometeam refused to waver in the face of the expected onslaught from the Trinidadians with their overseas-based armada, and launched several attacks on their defence. That defence appeared lucky not to have conceded two more penalties for what looked like blatant fouls on Myron Samuel and Oalex Anderson as they made easy passage through the porous Trinidad defence. The SVG bench then replaced Pitt with the pacey Shandel Samuel in the 66th minute while Trinidad had inserted the 18-year-old Levi Garcia in the place of Daniel Cyrus four minutes earlier.

It was Garcia who was to hurt SVG and almost did damage to goalkeeper Christopher with the go ahead goal in the 71st minute — the first of his brace. He added the second 10 minutes later and, reportedly became the youngest Trinidad player to score in a World Cup match.

Garcia, who plays for Dutch side AZ Alkmaar, received a headed pass from Jones, moved into the area, easily evaded a tackle by defender Akeem Williams before unleashing a thunderous shot through the hands of a brave Christopher to send his team 2-1 up.

But, undaunted, Vincy Heat refused to be buried and on another day may have been awarded at least two penalties.

First, Anderson, collecting a ball from George, burst into the box only to be bundled to the ground with referee Jose Kellys of Panama ignoring the pleas of the Vincentian players. A few minutes later, Myron Samuel was at the end of clumsy challenge by the Trinidad defence but once again Kellvs saw nothing wrong.

The constant forays into the Trinidadians defence brought dividends in the 77th minute when substitute Kyle Edwards, sprinting down to right side, played a diagonal ball over on the left for Anderson, who, after drawing three defenders as well as goalkeeper Phillip, feint as if to shoot but instead slipped the ball across for Shandel Samuel to easily tap into an open goal to make it 2-2.

Continuing to press forward, the Vincentians were dealt a sickening blow in the 81st minute when they allowed Garcia acres of space on the left after he had collected a pass, and the striker did not need a second invitation as he placed the ball out of the reach of the advancing Christopher for a 3-2 lead.

SVG then responded with a series of attacks of their own but the Soca Warriors nervously held on to the three points.

The lost eliminated any chance, though mathematically slim, that SVG remotely had of advancing to the next round while for TnT the win along with Guatemala’s 2-0 victory over the United States on Friday night — their first over the US in 21 years — left the “Warriors” atop the group with seven points ahead of Guatemala (six points) and USA (four).

The win for Guatemala also meant that a Vincy Heat victory in T&T on Tuesday could blow qualification wide open for the three other teams in the competition, with the final Group matches in September taking on added importance.

SVG will oppose the USA here in September and Guatemala away in the same week.