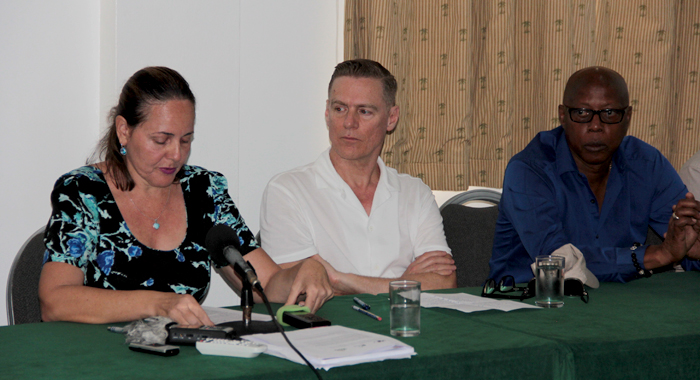 Canada-born singer-songwriter Bryan Adams has inspired the creation of the St. Vincent and the Grenadines (SVG) Preservation Fund, which was launched in Kingstown on Thursday.

The Fund is set up to raise funds and to distribute them to worthy entities.

The Fund is concerned about the nation’s forests and food quality and is supportive of conserving the critically endangered hawksbill and leatherback turtles.

Adams, a Hollywood Hall of Fame inductee, who has been living in Mustique since 2002, told the event that he was originally going to Jamaica in 2002, when a friend invited him to Mustique.

“And the next morning, I went to look for a home here. I am now a Vincentian. Actually, I’m a Vincy,” the “I Do It For You” singer said to laughter.

“And I want to make my contribution, as a Vincy, to this beautiful place. And this fund, I think, I believe, will make a huge difference, and it has already started,” Adams said.

“What I love about SVG is the nature, and I love the people,” he further said.

“I want to preserve that for my children and for all children — for your children as well.”

Adams said he has spent the last six years as head of the environmental committee in Mustique.

“I think that Mustique acts as a small model of what could actually happen here (St. Vincent). We’ve had huge advances in our sustainable energy, we are rebuilding our coral reefs, we’ve got an incredible environmental programme to protect fauna and the species on the island and I believe that this is what should happen in St. Vincent. And this was really the impetus for me to be here and create this fund with Louise [Mitchell]. I am happy to support this,” Adams said.

Meanwhile, Mitchell told the launch that Adams has been a contributor to environmental projects and suggested last year that a fund be set up for conservation in SVG.

“It was music to my ears,” Mitchell said, adding that Adams’s friend, Ben Goldsmith, a conservationist and investor in renewable energy, had already established such funds in the Aeoleon Islands and Ibiza.

“As such, our preservation fund is modelled on these two funds which are success stories,” Mitchell said.

She said those funds identify issues of concern facing their islands’ ecosystems and raise funds to address them.

Mitchell said the fund is effectively a sub-fund of the UK Friends of the Mustique Charitable Trust, which focuses on social development and poverty alleviation.

The fund is run locally by financial consultant Andre Iton and Mitchell.

It has a board of advisors, which include Bryan Adams, Ben Goldsmith, Henry Channon — former chair of the Mustique Company, and other Mustique homeowners.

Mitchell said that donors include other charitable organisations like the Grenadines Partnership Fund, Action Bequia and even individuals not resident on Mustique, like Sarah Blundred.

“But most of our lead donors are homeowners from Mustique,” she said, noting that donor Paul Skyes, a political supporter and philanthropist and a notable opponent of the EU, had come to the launch to associate with the Fund.

The Fund has about 9 other donors to the ones mentioned, Mitchell said.

Minister of Health, Wellness and the Environment, Sen. Luke Browne lauded the effort of those involved in the Fund.

“It is clear that we are now in a time when we have to put more emphasis on environmental issues,” he told the gathering.

“We have to see how we could protect the environment and we are doing this in the context of a broad international discussion which touches and concerns this very matter,” he said.

He said the Fund comes at a time when the world is grappling with the ravages of climate change.

“We are contending with our fragile position within the international order of ecosystems. And when we have a partnership that could be forged with such a fund and with St. Vincent and the Grenadines, I think it is vital for us to signal our appreciation for so important a partnership.”

Browne said that from the work that has already been done, it can be seen that the nation will benefit tremendously from the Fund.