Argyle Airport ‘on the verge’ of completion (+Video) 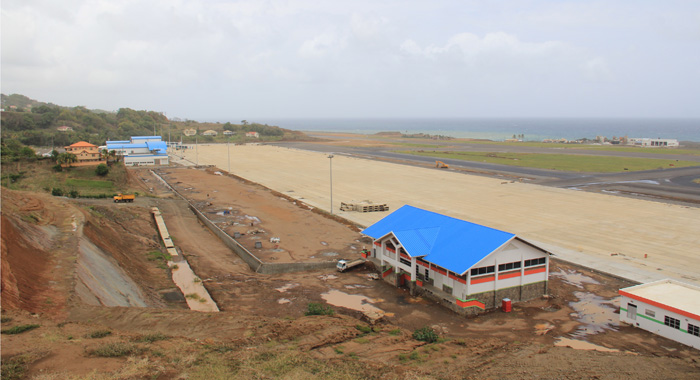 The long-delayed Argyle International Airport will be completed by June 2016, the latest in a string of completion targets dating back to 2011.

Rudy Matthias, head of the International Airport Development Company (IADC), the state-owned company responsible for building the airport, told the media on Friday that not even rain should prevent his company from meeting its latest target.

“We cannot foresee every problem we are going to have in the future. But, given where we are today, I believe very strongly that within the first half of this year we should be able to complete all the construction works and have the airport in a state of readiness for operation,” Matthias said.

“Indeed, while we are finishing off the pavement works and the small areas of earthworks that remain to be done, most of our efforts now are focused on putting the management systems in place to have the airport operational,” he said.

Matthias was speaking at a press conference hosted by Prime Minister Ralph Gonsalves after a meeting at the site of the EC$729 million airport.

Gonsalves said the presence of Director of Eastern Caribbean Civil Aviation Authority, Donald McPhail at the meeting was important given that his government is “on the verge of completing the airport”.

During the meeting, professionals from Cuba and St. Vincent and the Grenadines addressed the issue of the lighting of the airport.

The talks also including discussions on the outstanding earthworks, concrete pavement, drainage works, production and pavement of asphalt and completion of the perimeter fencing, the prime minister said.

“Those are the practical matters to be done, and, from all the reports which we have received, everything being equal, before the end of June, we should be finished with all of the earthworks and the works in the terminal building,” Gonsalves told reporters.

He said the retrofitting of the terminal building — which was completed three years ago — will be finished before June.

However, two private hangars to be constructed at the airport will not be finished by midyear.

One is being built by Mustique Airways, which should have started in January.

“I believe they are starting on Monday. We are hoping that that hangar will finish in time,” Gonsalves said, adding that he has spoken to the company about the urgency of them commencing.

“Because, clearly, we want when we are opened here, we don’t have a situation where the planes which coming inter-island, between ourselves and the Grenadines, they have to keep E.T. Joshua open for a few — for a short period of time while they complete their hangars.

The IADC has hired a Jamaican and a Barbadian to manage the ground handling company and the airport operations.

And Gonsalves said he will meet on Sunday with an American who has been hired on contract to manage the airport.

Vincentians will understand these personnel, said Gonsalves, who noted that a committee set up by Cabinet and not by the political directorate did the hiring.

“As you would appreciate, airport management, ground handling for an international airport, they are all highly-skilled activities. And we have had some people who have done training but you may do training, you get your university degree, but you have to get the experience to be able to operate a modern international airport,” Gonsalves said.

He also had a few words for critics of the airport.

“We are at the stage where the naysayers would see that something which was just a dream is within touching distance to become a reality and we are taking all the steps to put it in a functional manner.”

Meanwhile, Matthias told reporters that the IADC is now focused on operationalization of the airport.

“… as you must have seen when you came by the airport site, the construction works, I don’t want to use the words substantially complete, but it is.

“So, within the next two months or so, we are going to be demobilizing and cleaning up and getting the Argyle International Airport ready for operations. That is what we are working towards and I invite you to come back sometime midyear and see for yourself.

The runway has two layers of asphalt, one eight centimetres thick and the other five centimetres.

“The other areas of the runway already have the two courses of asphalt applied, except for this area 700-metre we are working on now,” Matthias said.

The taxiways in most areas already have the first layers. This should be completed by the end of May.

The IADC has said in the past that the pace of the work had been affected by rain.

But regional forecasters have said that the first half of 2016 will be characterised by lower than average rainfall, with the reverse during the second half.

“But, the report that we got this morning suggests to me that we should be able to complete the works by mid-May or thereabout, or, certainly, by the end of May. And that takes into account the likelihood of rain.”

5 replies on “Argyle Airport ‘on the verge’ of completion (+Video)”