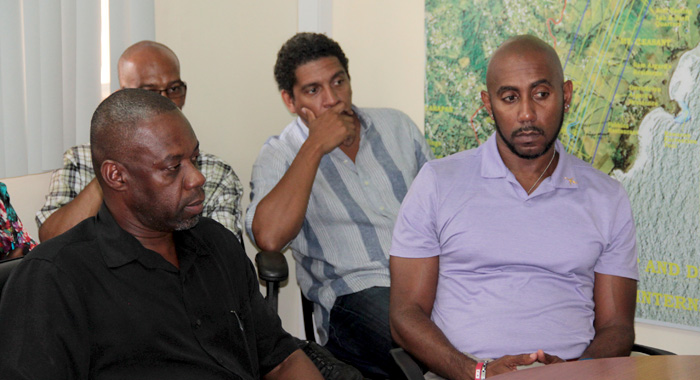 Head of the Tourism Authority, Glen Beache, says one or two airlines have already indicated how many flights they would like to make to Argyle, once the airport is up and running.

But Beache, when asked at the press conference on Friday where he made the announcement, declined to name the airlines.

“I am in a position to say so, but I won’t say so because competition is also fierce out there and our negotiation with the airlines has to keep within a certain pathway and so and they don’t want their competition to know if they are interested and so on. But I can assure you that it is two of the bigger ones,” he told a press conference with Prime Minister Ralph Gonsalves after a meeting with airport stakeholders.

The EC$729 million airport has missed completion deadlines annually since 2011.

But Rudy Matthias, head of the state-owned firm responsible for its construction, told reporters at the media briefing on Friday that he is confident that the airport will be completed by June.

Beache said the Tourism Authority continues to speak with airlines out of Europe, North American, the Caribbean and Latin America about flying to Argyle.

“The interest is there, as I have said before. They’ve requested some technical information, which we have given to them, they continue to monitor the situation, we continue to provide them will all the information that is needed,” he said.

He went on to say that airlines have made a decision.

“There are one or two of them that have already run their numbers and have indicated to us exactly how many flights weekly they would like to do once we are up and running, so we are very happy about that.

“And we continue negotiate with all of them. One or two others also that have interest but they have some internal things that are going on within their airlines,” he said.

In this category, he mentioned Air Canada’s subsidiary, Rouge.

To illustrate, he suggested that a flight from the United Kingdom would first land at Argyle before going on to Tobago.

He said British Airways does one or two of those with St. Lucia and Tobago, and Virgin probably does one with Antigua.

“So we are looking at that to see what direction is best for us and also for the airlines. Obviously, if we do a tag flight, it minimises what we have to put in with the airlines, because it will be joint in terms of revenue guarantee and marketing funds…

“The interest is there, we are just waiting for the go ahead to make sure everything is set and, as I’ve told the airlines, it’s of benefit to them, because whoever gets into St. Vincent and the Grenadines first are the ones that are gonna benefit hugely.

“I mean, it’s one of the last destinations to put in an international airport and those that have run their numbers are very pleased with what they have seen and what we can, what they project will be a very successful relationship between St. Vincent and the Grenadines and themselves.”

Regarding his declining to name the airlines that have indicated how many flights they hope to make weekly to Argyle, Beache was told that one would imagine that an airline with such a plan would have already begin to market a new destination if they are planning to fly there within the next 12 months.

“It would be joint marketing between the airlines and ourselves. That’s part of the negotiations that are gonna take place. It is not only a matter of marketing the destination, it is a matter of setting up the tour operators to promote those packages, working with those private stakeholders in St. Vincent and the Grenadines to make sure we have everything coming together. But, yeah, the marketing is gonna be very important, and once we do our marketing properly, i can’t see us really having to do much in terms of revenue guarantee,” Beache said.