Court ruling on petitions favourable to both Govt and NDP 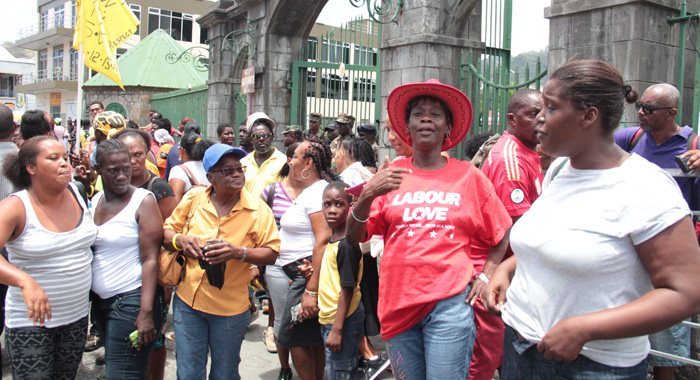 ULP and NDP supporters outside the court precinct on Monday. (IWN photo)

The High Court ruling on Monday on the application of the government to throw out two election petitions filed by the opposition New Democratic Party (NDP) gave both the applicants and respondents reasons to celebrate.

It keeps the NDP’s petitions in the court system but suggests that the government would win ultimately.

Justice Brian Cottle ruled as “premature” the government’s application to throw out the petitions.

However, he went on to say that he believes the application would succeed if filed at the beginning of trial on the election petitions themselves.

The NDP has filed petitions challenging the results in Central Leeward and North Windward in the Dec. 9 general elections.

Electoral officials say that the Unity Labour Party won the elections and a fourth consecutive term in office by taking eight of the 15 seats, while the remaining seven when to the NDP.

Regional and hemispheric observers have said that the elections were free and fair, but the NDP has cited a number of irregularities, including the design of some ballots, which it said was defective.

“I agree with counsel for the petitioners that I am compelled to follow the decision of the Court of Appeal per Rawlins CJ in Joseph v Reynolds. The application to strike out is premature,” Cottle said in his written ruling, which came exactly one month after he heard arguments on March 4.

“This court has no jurisdiction to entertain it by means of an interlocutory application in chambers. I therefore refuse the application to strike out at this stage. However, having had the benefit of full arguments I am of the view that such an application, if made at the beginning of the hearing of the petition, is bound to succeed,” the judge said.

He also said his comments “may be of some assistance to the parties in deciding the way forward and saving costs, time and national uncertainty”.

Leader of the Opposition and President of the NDP, Arnhim Eustace, welcomed the decision, saying on his party’s radio programme that the NDP has scored a victory.

“… we won the battle today and our battle will continue,” he said, adding that lawyers for the NDP have indicated that they will go ahead with matters related to the case.

“So, the point is, they (the government) did not succeed in what they wanted to do, that is, to strike out the NDP petitions. In that sense, they lost; we won.”

He said there are certain other aspects of the case to be dealt with, including the matter of the member of Organisation of American States election observer mission who is willing to testify on behalf of the NDP.

Eustace further said that the NDP interprets the comments by Cottle about the likely outcome of the petition if filed as the beginning of the trial as an indication that he would recuse himself from further hearings in the case.

“I have read that comment, I have had some consultations on it, and, Justice Cottle, I read that as him trying to recuse himself that, not be involved in the process going forward as the judge.”

“For whatever reason, he is adding his comment,” Eustace said.

Meanwhile, lawyers for the government also cited Cottle’s comment in the judgement saying they are “pleased that he has ruled that if the same application is made at the beginning of the hearing of the election petitions themselves, the petitions would be struck out.

“This ruling vindicates the position of the respondents. The respondents reserve their respectful opinion on the Judge’s ruling of the prematurity of the instant application,” said the statement by Anthony Astaphan SC, Richard Williams and Grahame Bollers, solicitors for the respondents.

Monday’s ruling has brought an end to one phase of the political tension that has engulfed St. Vincent and the Grenadines since the Dec. 9 elections.

Scores of NDP supporters responded to Eustace’s call on Saturday to gather outside the court on Monday, and celebrated the judgment with cheers.

There was strong police presence outside the court precincts before and after the judgment, but there was no incident of ill-discipline of unlawfulness, and an exchange of words between NDP supporters and a few supporters of the Unity Labour Party remained a peaceful, though intense, verbal confrontation.

Also, there was strong police presence outside the Electoral Office, where an armed police officer has been stationed since the December elections. The daily protest outside the Electoral Office continued on Monday, but the judgment did not seem to have done much to increase the number of persons there, with police officer seeming to outnumber protesters.