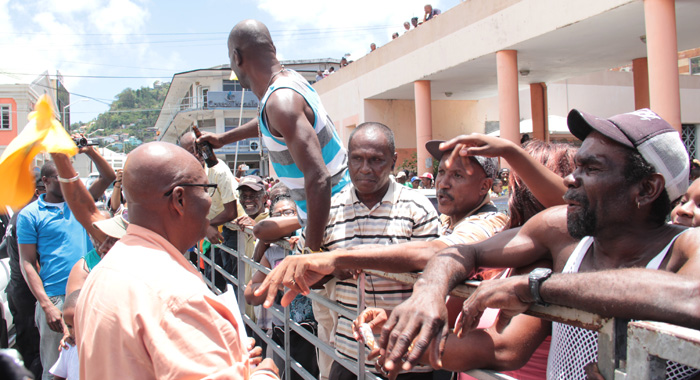 The NDP is contesting the results in Central Leeward and North Windward in the Dec. 9 general elections.

Electoral officials have declared the ULP winners of a fourth consecutive term in office, by a single-seat majority, a repeat of the 2010 election results.

But the NDP says that the ULP stole the vote, claiming also that the design of some ballots were defective and disenfranchised voters.

In his immediate reaction to the judgment, Grahame Bollers, a lawyer for the government, told reporters outside the court of the judge’s decision.

“Well, he’s refused the application but he has said that if the matter is raised in the hearing of the petition, our arguments will succeeds,” Bollers told reporters.

Asked about the logic of that element of the decision, Bollers said, “Well, we respect the decision of the court.”

He, however, noted that he had not had the chance to read the entire judgment.

“We have not examined the judgment as yet,” Bollers said when asked about other elements of the judgment.

Kay Bacchus-Browne, a member of the NDP’s legal team, when asked for her immediate reaction, also noted that she had not had the chance to read the judgment.

“I am going to read the judgment. I haven’t had the chance to read it as yet,” she told reporters.

Bacchus-Browne, however, said that the judge had no choice but to strike out the government’s application.

“We knew he couldn’t grant it. We wasted a lot of time when we knew upfront we made the submission that this application was wrong.

“I don’t know why we wasted all this time when we knew we had to come back to square one.”

Vice-president of the NDP and MP for the Northern Grenadines, Godwin Friday, who is also a lawyer, reserved comments on the judgment.

“It is as counsel just said, but we have to read the judgment and then take advice from counsel,” he told reporters.

Regarding the ongoing protest by the NDP, Friday said, “Well, we have a political and legal strategy going forward. The political strategy is informed by the legal, but that continues.”

Lauron “Shera” Baptise, who represented the NDP in North Windward in the Dec. 9 vote was also outside court, but declined comment until he had been briefed by counsel.

Leader of the NDP, Arnhim Eustace, was among the small crowd of NDP supporters gathered near the Central Market, across the street from the court building when the judgement was handed down in chambers.

The NDP head could be heard saying that there is in fact no judgement, in light of what the judge had said about the government succeeding if the matter were raised in a trial.

Eustace, however, declined comments to the media, saying he was going to meet with the NDP’s legal team, which had gathered upstairs the two-story court building.

Prime Minister Ralph Gonsalves is slated to make a statement to Parliament on Tuesday about the elections.

The NDP has been boycotting meetings of the national assembly since the December vote.

Friday, however, declined to say whether NDP MP will attend Tuesday’s meeting of Parliament, telling journalists “wait and see”.