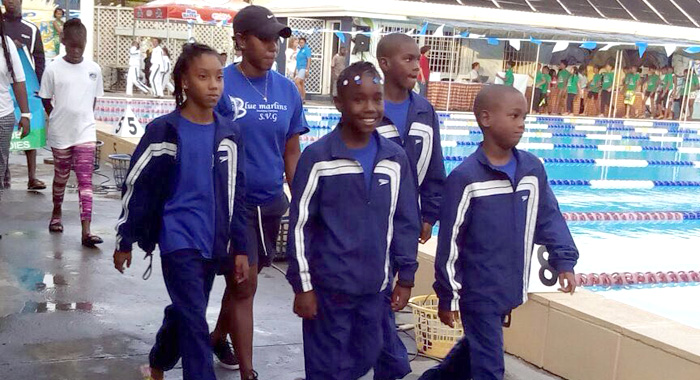 Kennice Greene (8) led the team’s success by coping 6 medals and 7 personal best times from the 11 events she entered.

She won gold in the 50m backstroke, setting a new meet record, and silver in the 50m fly. She was also able to attain 4 bronze medals in the 25m, 50m and 200m freestyle and the 25m backstroke events. She placed 3rd overall in the 7-8 age group for girls.

Bryson George (11) won 2 medals and achieved 4 personal best times. He received a silver medal in the 800m freestyle in his first competitive attempt at the event and a bronze in the 100m breaststroke.

His younger sibling, Brandon George (8), managed an impressive 9 personal best times of the 11 events he entered.

Adiah Phillips (10), one of the newcomers to competitive swimming, was able to perform credibly well by achieving 7 personal best times of the eight events she entered.

The Black Sands Swim Squad and the Bequia United Swim Club were the other two local clubs to compete at the event.

Some 300 swimmers from six countries participated.