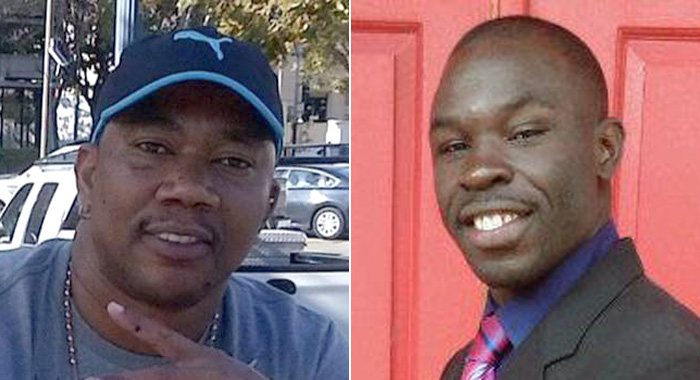 A decision by a resident of Chateaubelair to videotape a police operation in the North Leeward town Tuesday night resulted in him being manhandled by an inspector of police who wrongly insisted that only journalists have such a right, a position that contravenes the laws of St. Vincent and the Grenadines (SVG).

In SVG, the legal principle is that there is no reasonable expectation of privacy in public places, and this does not only apply to media personnel — who have no special privilege in this regard.

The North Leeward resident, “Plaka” Chance, who lives on the beachfront, told iWitness News that he was alerted to the police operation when he heard gunshots being discharged in his yard sometime after 10 p.m.

Chance said he was sitting in his patio towards the road watching a movie on his phone.

He said he had earlier seen saw two men coming from the direction of the beach.

Chance told iWitness News that he saw Inspector of Police Hanif Simon and inquired about why gunshot was being discharged in his yard.

The North Leeward resident said he noted to the officers that his grandparents are inside and asked what would have happened if they were scared to the point that they suffered a heart attack.

He said the inspector apologised and told him he (Chance) knows what is going on.

Chance said he told the police officer that he had in fact seen two men coming from the direction of the beach.

He said the police officer searched the beach and also attempted to search the house of one of his neighbours, who noted that a warrant was needed for that purpose.

Chance said that the police subsequently left and came back some time after 1 a.m. with what they said was a search warrant.

He told iWitness News that this neighbour insisted on seeing the warrant rather than just having it read to him, as he wanted to verify that it was genuine and was indeed to be executed at his house.

The neighbour agreed to the search and Chance was standing in the road recording a part of the search when a police officer told him not to take any photos of him.

Chance insisted that he knows his rights and sometime later, Simon came to Chance and told him to relax, preceded to push him and ask if he is a journalist.

Chance told Simon he is a journalist and that he works with “Kenton”, a reference to Kenton X. Chance, executive editor of iWitness News.

The Chateaubelair resident is not an employee of iWitness News, but, like many of our readers, has supplied us with information or images that he thought might be for interest to the public.

During the exchange with Simon, Chance accused the senior officer of attaining his position because of politics.

Simon is a former member of the Prime Minister’s security detail, who has maintained a cordial and professional relationship with the media.

At one point in the video, another officer is heard telling Chance that he is obstructing the police — although Chance was standing in the road and it was the police who had come towards him.

It seems as if the officer was attempting to hit Chance, who responded, “Ah warh you hit me.” The inspector can be heard telling the officer, “Don’t do that.”

During the exchange, Simon tells Chance that they are not friends, a sentiment that Chance returned, saying that he is not buying friends.

Chance told the officer that he is not afraid of guns.

He told iWitness News that he told the officer this because he is a veteran of the British Army and is not intimidated by the sight of a gun.

Chance said the police completed their operation, didn’t find anything illegal and went back to the station.

He said that sometime later, Simon returned to his house knocked the door and told him to put on a shirt and come to the station because he wants the video on his cell phone, saying he had no right to make the recording.

Chance said he asked the inspector if he was under arrest and was told no. He said he then told Simon that he had done nothing wrong and his cellphone is his property and that he had already sent the video to iWitness News.

The efforts of the police to prevent the civilian from recording the video Tuesday night mirrors the attitude of some police officers, including senior officers, who seem to believe that they have a right to determine who can or cannot record images or video in public.

This continues notwithstanding the efforts of other senior police officers, including Commissioner of Police, Michael Charles, who has repeatedly said, at least to iWitness News, that officers must respect the rights of civilians and stop citing obstruction of police as a reason to infringe on the rights of residents of SVG.

As more and more Vincentian gain access to handheld devices, an increasing number of persons are recording development in public that are of interest to the media and the public at large.

In a previous conversation with the police chief on this matter, he said that any police officer who is convinced that what they are going is right, should be happy that a member of the public records it.

iWitness News contacted Simon Wednesday morning, but he declined comment and directed us to the Police Public Relations Department in Kingstown.

Head of the Police Public Relations department, Inspector Hawkins Nanton, told iWitness News around 8:30 Tuesday morning that he has no knowledge of the incident but that he would look into it.