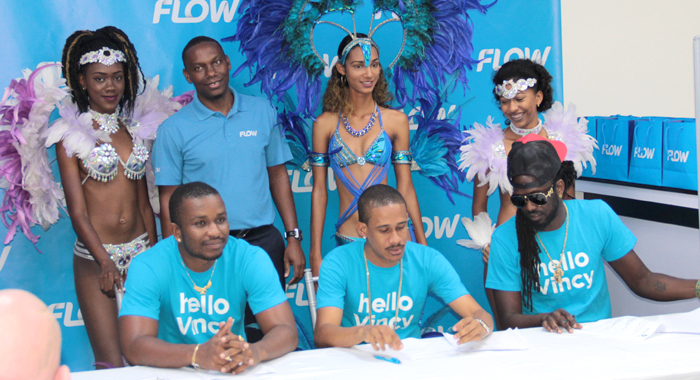 Flow has replaced LIME as the brand under which the company resulting form the merger of Cable and Wireless and Columbus Communications will do business in St. Vincent and the Grenadines.

“Today marks a turning point in telecoms here in St. Vincent. We have two great companies coming together,” country manager of Flow, Wayne Hull said on Friday at the launch of the brand.

He said the two companies, whose merger was announced in November 2015, are the backbone of telecommunication throughout the Caribbean and own some of the largest assets in the ocean to deliver telecommunications.

“So we are now with the refreshed brand Flow,” Hull said.

He said the marriage of the two “great companies” and two “great teams” will deliver to St. Vincent and the Grenadines a “refreshed, more spirited, younger brand that will bring products, new services”.

He noted that Flow is the only telecoms provider in SVG that can deliver to customers cable, mobile, Internet and your fixed line voice service.

“So I think that is an extremely great achievement for one company to be the sole, one-stop shop for all your   telecommunications need here on the island,” Hull said.

He said Flow represents investment and will invest just under US$10 million over the next two years to upgrade its network and its coverage across the country to deliver a minimum of 10MB speed Internet service.

The company will also roll out a new store at the former LIME location in Kingstown.

“… it will be unmatched, unlike anything you have seen in St. Vincent,” Hull said.

He said the company has a new suite of products and mobile apps and new content that will be unveiled within a few weeks, even as he noted Flow will be the sole owner of the rights to broadcast in the Caribbean, the Barclays Primer League, ,the Indian Premiere League and the Olympics in Rio.

“So we have a quite a great amount of content that’s coming to the market. It’s time to greet the future and we are the future of telecoms in St. Vincent. Flow will be a positive change to our customers and we are confident that you will see how this merged company will bring those benefits to our customers.”

“We also want Flow to be a great place to work,” he said, adding that he wants the company to be the first choice for Vincentians interested in the telecoms sectors.

“So, we are going arm our people with the right tools and serve our customers with passion.”

The launch comes just over a week after Flow backed away — after an intervention by the government — from a plan to increase some of tis cable television rates by up to 25 per cent.

“We will advise further if there is going to be any changes,” Hull said, when asked about this.

“Any price takes into account a number of factors and it is generally based on cost. It is not matter of justifying. It’s just a matter where we are faced with different cost scenarios and you have to make price adjustments accordingly,” Hull said when asked how does the company justify the changes in prices.

“But just to confirm we have put those price increases on hold and we will advise if there will be any further changes at a later date,” he said.

One reply on “Flow replaces LIME brand in St. Vincent”