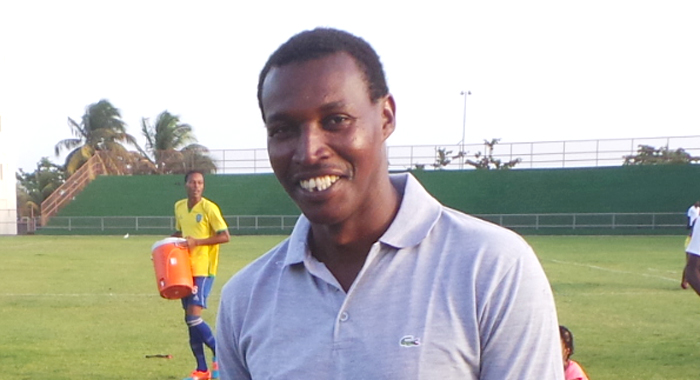 St. Vincent and the Grenadines Senior Men’s Football Team, “Vincy Heat”, are at the winding down stage of their 2018 World Cup Qualifying campaign and, as has been the case in such previous campaigns, the Vincentians are in the cellar position in their group.

The negative results have also set in motion the familiar cries and demands from fans and former administrators for “the head” of the coach, in this case, former national captain and ace defender, Corneilus Huggins.

After four matches, Vincy Heat have failed to display any real spark and have suffered defeats in each game — three of these by big margins.

Prior to the commencement of the campaign the St. Vincent and the Grenadines Football Federation (SVGFF) had secured the services of another former captain and defender, Ezra Hendrickson, during his off season, to assist Huggins with the preparation of the team.

Hendrickson, who is the head coach with the Seattle Sounders 2 in the United States, arrived with plenty of expectations in the lead up to the Vincy Heat game against the United States. But while the no-nonsense Hendrickson appeared committed to the cause, some reports indicate that there were some who were uneasy with his presence.

Ignoring possible distractions and sideshows, Hendrickson set about trying get a the group of amateurs with some latent in some cases in shape to possible upset Jurgen Klinnsman’s band of professionals on Nov. 13, 2015. They were instead beaten 1-6, despite getting on the scoresheet first, through a tremendous strike by Olaex Anderson. Four days later, they were thrashed 0-4 by Guatemala at the Arnos Vale Playing Field much to the dismay of Hendrickson, who felt that the players were not good at carrying out instructions and some were not up to the requisite standard.

He returned to his club duties as was expected for pre-season and Huggins and his staff have been in full control, as before.

The resumption of the Qualifiers have seen SVG returning to “losers place” with 2-3 and 0-6 losses to Trinidad and Tobago’s “Soca Warriors”, resulting in the call for change. The team have conceded 19 goals in four matches in the Qualifiers. And with a home match against the United States in September and an away fixture against Guatemala remaining, they are in danger of going past the 29 in 1992.

While SVGFF president, Venold Coombs, appeared reluctant to go for a foreign coach, it is being suggested the loud calls may see the executive going for possibly Lenny Taylor or Zoran Vranes, both of whom have worked with the SVGFF in the past with some level of success, to help out on a short term basis — initially.

Taylor, who likes to refer to himself as a “Jamerican”, has had a number of stints as coach of the senior men’s team especially with the Shell Caribbean and Digicel Cup in the 1990’s. The team’s best showing under Taylor, who was named as the USA Best College coach in 1971, was second place in the 1995 Caribbean Cup. This position saw them qualify for the CONCACAF Gold Cup, where they came up against the powerhouses of the region and did not fare too well — losing most of their matches badly.

Taylor was later replaced by US-based Vincentian, Sammy Carrington, who, despite putting together a comprehensive plan for the development of the sport, failed to deliver any major results on the field, and he too was relieved of his duties.

What can be described as the SVGFF’s passing parade in technical directors and head coaches makes for interesting reading with disgraced former FIFA vice-president, Jack Warner, said to have used his influence and position of power to foist his cohorts on vulnerable countries like SVG. The evidence of Warner’s hand in the selection of such persons came in the 1992 World Cup Preliminaries, as they were known back then, when Brazillian Jorge Ramos was sent to take charge of the SVG team under coach Elliot “Mori” Millington.

Millington, a former national captain and brilliant midfielder, was appointed coach of the team for the country’s debut into World Cup Qualification and after suffering a number of heavy defeats, had suggested to the SVGFF the sourcing of a more qualified and experience technical person. A request was made to the Caribbean Football Union (CFU) through its president, Warner, and Jorge Ramos Casagrande was shipped out as SVG’s first Technical Director. Struggling badly with the language of the natives and failing miserably with a style and brand he tried to introduce, his attempt at constructing a large house on quicksand inevitably failed.

With Millington still battling in the wake of the adulterous flirtation with Ramos, Taylor was brought into the picture and both he and Carrington exchanged vows with the SVGFF, and though these relationships appear pregnant with possibilities, they were all stillborn.

The Louis Daisley-led SVGFF, in between the embrace with the US-based Vincentian coaches, had also made a pass with former SVG midfielder Adolphus “Pabits” Davis who had built up a big reputation in the Brooklyn League as coach of the St. Vincent team there. But Davis could not produce the results yearned for by a nymphomaniac football public and was dumped for Trinidad’s St. Clair.

St. Clair, who reports say came on the advice of “football kingmaker” Warner, took charge of the 1998 World Cup Qualifiers. Briton Jim Conway, who came in SVG as part of an Olympic Solidarity Programme, was later appointed to replace St. Clair for a period of six month in 1999.

The SOF (Save Our Football) was once again answered by the “always ready” Taylor, but the varying contraceptives instituted by the SVGFF and the frigid relationship soon had him pulling out and allowed Carrington to re-enter and spearhead the 2002 World Cup campaign.

It was post 2002 that the first real sign of progress for SVG under “foreign hands” can clearly be identified with the English-based duo of Ces Podd and Adrian Shaw who not only changed the attitude and work ethics of the players, but forced the SVGFF to adopt a more professional approach to the team. They also organised a two-week stint in the UK for team as it prepared for World Cup Qualification action. Their tenure under the St. Clair Leacock presidency lasted 18 months and was brought to a halt under circumstances which many believed was engineered by the now disgraced Warner. Their replacement, Zoran Vranes, a close associate of Warner, arrived to take up the post, even as the pair were still trying to seek an audience with Leacock to determine the reason for their termination.

During Vanes’ stay, which lasted four years, SVG recorded victories over Trinidad and Jamaica for the first time and reached a record 73 on the FIFA Coca Cola Rankings. But the ousting of the Leacock administration saw the departure of Vranes. The Joe Delves executive accused the previous executive of spending too much on “foreign coaches” and went with Roger Gurley. But after resisting constant solicitation from the public for a while they eventually gave in and entered Stewart John Hall — another Englishman who hung around for five months while overseeing the World Cup Qualifiers against Canada and left with the team’s elimination.

And the Delves administration went about fulfilling what some say was a pre-Election promise –reemploying Carrington. But as in the past the relation came to an end while the menu for the wedding was still in the planning stage and Carrington was shown the door.

While the sport reached its apex under erstwhile Vranes who was accused by many of “living off the fat of the hog”, it hit its nadir under the wandering gaze of another Englishman, Colin Rowe, who, reports say, was signed up by the Delves executive on what was seen as a lucrative contract with a reported salary of EC$19,000, along with other benefits. Vranes’ reported salary was said to be in the region of EC$10,000. Rowe, who was given the responsibility of developing a programme to enhance the talent of both players and coaches, was found to have done very little on and off the field and ended his tenure in acrimonious circumstances with Coombs, who had replaced Delve as president in 2011.

Coombs refused to honour the arrangements left by Delves and accused Rowe of engaging in practice, which were less than worthwhile in the advancement of the sport. In the end, Rowe was left to “paddle his own canoe” and drifted off into the sunset.

Apparently stung by the Rowe fiasco, Coombs refused to go the “foreign coach” route and settled with local coach Huggins, as was his wont over the years. He is seen as the president who has given local coaches the most opportunities to work with various national teams. Among the list of those appointed under his tenure are Millington, Fred Trimmingham (father of Huggins) Gurley and Guy Lowe.

But while Coombs has shown a vulgar loyalty to home-grown coaches, the current situation will test even his known and admired iron will in ignoring the demands of the fans and what reports say is the pressure from within his executive to make the change.

He has refused to discuss the matter openly but many believe the pensive and sober look is one of a man searching for the most amicable solution to a problem that has the potential to caress the ethos of the mischief-makers and soothsayers if not astutely dealt with. Coombs, fully cognisant of the paramountcy and urgency of this decision will be expected to act firmly but with some level of compassion.

The agenda for the attached and the adversaries have both been prepared they all await the signal to commence arguments.

Extra time is about to run out.