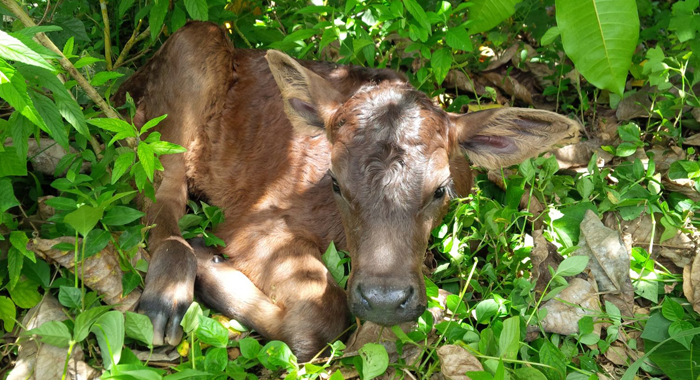 The calf was named Ja-C, in honour of contributions of Jamaica and Cuba to the programme.

St. Vincent and the Grenadines on Tuesday saw the birth of a 72-pound calf conceived through artificial insemination.

The bovine was born to farmer Wayne Daniel of Orange Hill.

Daniel’s cow was the first of 30 cattle artificially inseminated under the Ministry’s of Agriculture’s Artificial Insemination programme.

The Artificial Insemination programme was initiated in 2015 and is aimed at developing and expanding the livestock sector here.

One hundred straws of cattle semen were donated by the Government of Jamaica. Among the breeds of cattle expected to be bred from the project are Jamaican Hope, Red Pol and Black Pol, all indigenous to Jamaica.

“I want to congratulate my brother Wade for being the first famer to receive a calf. He was approached by the Ministry of Agriculture, just like other cattle farmers. He took the initiative very serious and today we are witnessing the birth of the first artificially inseminated calf,” said Minister of Agriculture, Saboto Caesar.

Caesar also encouraged all cattle farmers in SVG to look at the opportunities and possibilities created by exporting cattle to Grenada and other countries.

“We are going to embark on a very robust programme throughout 2016 so that we can have as many cows go through the process of artificial insemination. We are in the process of looking for different breeds of cattle…” the minister added.

Meanwhile, Daniel, a farmer in Guava, Orange Hill for over 35 years, said he was “very excited and happy”.

“This is a very good initiative the Ministry has undertaken and I am very proud to be the first farmer whose cow was the first to give birth under this artificial insemination programme,” Daniel said smiling.

The female calf was given the name, Ja-C, a symbol of the cooperation between Jamaica and Cuba on the artificial insemination initiative.