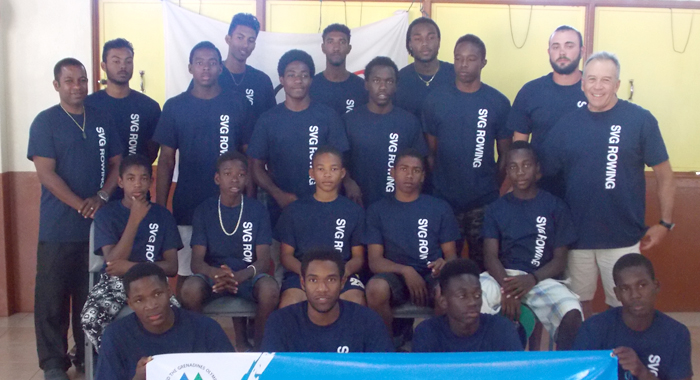 The future of rowing in St. Vincent and the Grenadines is looking brighter after the completion of the first technical course in rowing in Layou on Sunday. Seventeen athletes from all over the country were trained in the technical aspects of the sport under Osvaldo Borchi, the International Rowing Federation’s (FISA) Development Consultant for South and Latin America.

The course, which took place at the Grace and Truth Campsite and Jackson Bay in Layou, covered both aspects of indoor rowing on ergs (rowing machines) and on the water using competition skulls (boats).

The camp saw 17 males, 14 to 21 years old, receiving the training and the classification of rowers into teams to help move the sport forward.

Borchi, who has coached several teams in Latin America, was pleased with the course and sees great potential from the athletes.

“I am happy as the athletes have great physiological development and now have to work on improving their techniques and endurance,” he said. He stated that he was looking forward to seeing a team from SVG in the 2018 Youth Olympics in Argentina and the 2019 Pan American Games.

The training camp comes after SVG’s first sojourn in rowing for the Olympics. A three member team travelled to Chile where they competed against 23 other teams in the region for a spot in the 2016 Olympic Games in Rio.

While the team failed to qualify, they came in for high praise for the professionalism and perseverance from Borchi. Member of team, Kevin Gibson, stated that it was a learning experience. “After El Salvador last year, I was happy to compete in Chile. While we did not qualify, we learnt a lot in terms of training techniques especially for stamina and look forward to putting in more work for the upcoming competitions.”

The next competition for SVG Rowing will take place in the summer months with the National Outdoor and Indoor Championships tentatively scheduled for August 2016.