One Health Project Team helping to wipe out lionfish 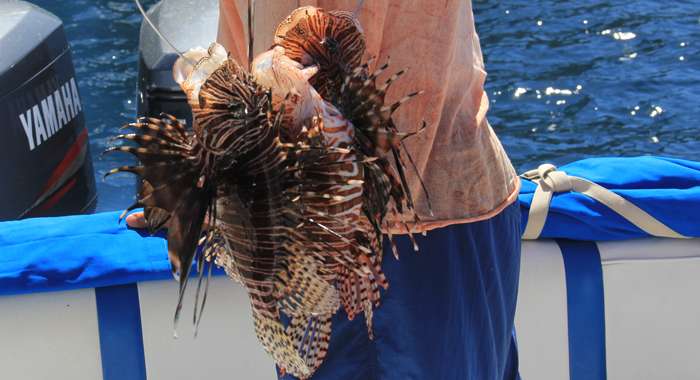 The St. Vincent and the Grenadines One Health Project Team is contributing to the efforts to reduce and to eventually eliminate the lionfish invasive species in the nation’s waters, specifically in the Grenadines.

One Health Project Team spoke of its efforts at a press briefing in Kingstown on Wednesday.

Team member, Kerry-Ann Hamilton, counsellor at the SVG Community College, said the aim of the One Health Project is to “improve health and well-being through the prevention of risk and mitigation of effects of crisis that originate at the interface between humans, animals, and their various environments”.

Hamilton said there will be several activities to create further awareness of the lionfish and its effects on local fish populations.

These activities include visits to secondary and primary schools in the Grenadines, poster competitions, and cook-offs.

Senior Environmental Health Officer in the Ministry of Health, Wellness and the Environment, Todd Lewis, said he is privileged to be a member of the One Health Project leadership team.

He added that the environment, on a whole, is at the centre of everything that we do in SVG.

Lewis said wellness always incorporates people regardless of the topic, since everything is interconnected in this particular chain.

The One Health Project Team is a component of the One Health Leadership Series to enable and empower professionals from the health, agriculture, and environment sectors to play leadership roles on cross-sectoral issues in Caribbean countries.

The project was first launched in November 2014 at the Rex Resorts Turtle Beach Hotel in Tobago and will conclude in March of 2017.