A callaloo of excitement at the oval 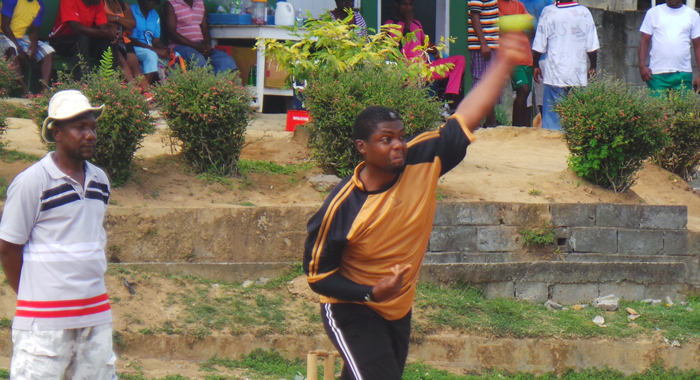 It was another action-packed weekend when the St. Vincent and the Grenadines Police Co-operative Credit Union Clinchers T20 softball 2016 Tournament continued at the Richland Park Oval.

The action on the weekend saw a Super Over decider, a beaver trick and a near century as Owia Young Strikers, Sion Hill Tallawahs, Gunners, Dr. Thomas Injectors and RSVG Police all posted victories.

On Saturday, Owia Young Strikers defeated Smart Strikers by 42 runs after winning the toss and electing to bat and getting to 107/7 off their 20 overs, with Diswayn Williams getting 33. Denis Grant took 3/18.

Smart Strikers were dismissed for 65 in 17.1 overs, with Zaniel Baptiste taking 3/12.

In the other match on Saturday, Sion Hill Tallawahs defeated Rate Yo Boyz Challengers by 115 runs.

Sion Hill Tallawahs, asked to take first knock, got to 164/8 in their 20 overs with Irwin Williams 33 being the topscore. Rate Yo Boyz Challengers were then dismissed for 49 in 14.3 overs, with Marlon Baptiste taking 5/4 from four overs and Shanlery Lavia 3/10.

On Sunday, Gunners got the better of Snipers Reload by way of a Super Over.

Batting first, Gunners made 88 in 18.4 overs with Danny Allen getting 29, Emmanuel Baptiste took 3/28. Snipers Reload were dismissed for 88 in 20 overs with Jason Williams getting 27.

In the Super Over, Snipers Reload made 14 while Gunners made 15 by hitting a 6 off the last ball.

In another match on Sunday, Dr. Thomas Injectors beat Bank of SVG Allstars by 17 runs after Damion Allen took a beavertrick to end with 4/4.

RSVG Police, led by a compelling innings of 91 by Roderick John, reached 144/8 20. John, who was caught on the boundary with 3 overs in the innings remaining, struck 11 sixes and 4 fours. Ovando O’Brien took 3/9 and Raymond Simmons 3/20, bowling for Gomea Bombers.  In reply, Gomea Bombers could not replicate John’s surface-to-air attack and limped to 105 in 15.2 overs.

Player of the week is Roderick John for his innings of 91 for RSVG Police against Gomea Bombers.