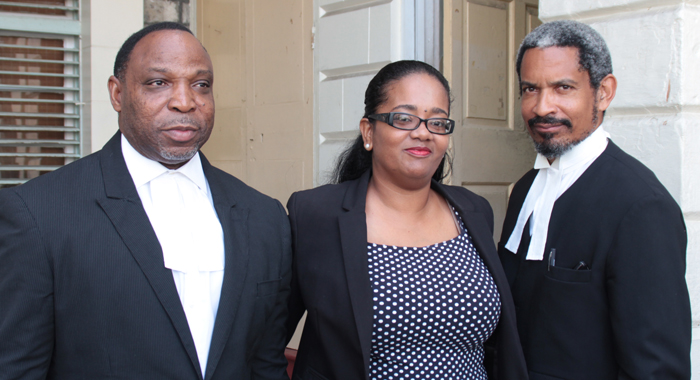 The Eastern Caribbean Court of Appeal has rejected Director of Public Prosecution, Colin Williams’, appeal of a magistrate’s decision to throw out six charges against then opposition senator, Vynnette Frederick, in July 2013.

The decision was handed down in Kingstown on Wednesday.

Frederick and her lawyers welcomed the court’s decision, but she still has to answer to nine charges which her lawyers have said are “alarmingly similar” to those that the magistrate dismissed.

Scotland told iWitness News the crux of their argument and the court’s response.

“Mr. Andrew Pilgrim, Queen’s Counsel, when this matter came up, took a preliminary point, that it is an abuse of the process, having re-laid nine charges out of the same matter to come and argue six charges that arise from the same charges. And the honourable Chief Justice agreed that the DPP had to withdraw the appeal, so those six charges are out.”

After the magistrate threw out the six charges in July 2013, the Office of the Director of Public Prosecutions brought nine charges against Frederick and appealed the magistrate’s decision.

She was re-arrested that same day, July 11, 2013, while having lunch with her legal team, relatives and party officials in Kingstown after the magistrate’s decision.

Scotland told iWitness News that his client is still encumbered by the nine charges that were brought against her, but said the lawyers “are dealing with that in steps”.

Meanwhile, Frederick told iWitness News outside the court building that the is “satisfied with the pronouncement of the chief Justice.

“I understand her to be appreciating the preliminary point about abuse and I am just pleased with the outcome.”

Asked to comment on the nine other charges against her, Frederick told iWitness News:

“There is an appeal. The content of the appeal speaks to the issue of abuse of process. So we will see how it goes.”

The decision on Wednesday is but one episode in a long-running court battle that began in 2011, when Frederick, then a senator for the opposition New Democratic Party (NDP) filed private criminal complaints against Prime Minister Ralph Gonsalves in relation to comment he made during the campaign for the December 2010 general election.

Frederick was the NDP’s candidate for West St. George in that election.

Her claims against Gonsalves were thrown out, and, in September 2012, she was charged “that on January 10, 2011, at Kingstown, she did make a false declaration before Sonya Young, a magistrate, a person authorised to take a declaration upon a matter of public concern, under circumstances that the false declaration, if committed in a judicial proceeding, would amount to perjury”.

Frederick, an attorney, was also charged with making false declarations on June 16, 2011 and May 23, 2012 before Faye James.

But Magistrate Rickie Burnett, sitting at the Kingstown Magistrates’ Court on July 11, 2013, upheld an April 2013 defence submission that the six charges against the senator lacked details and particulars.

He threw out the matters and told Frederick she was free to go. She was arrested about three hours later while having lunch at a restaurant in Kingstown and nine charges were brought against her.

Senator rearrested, slapped with 9 charges hours after court dismissed cases against her