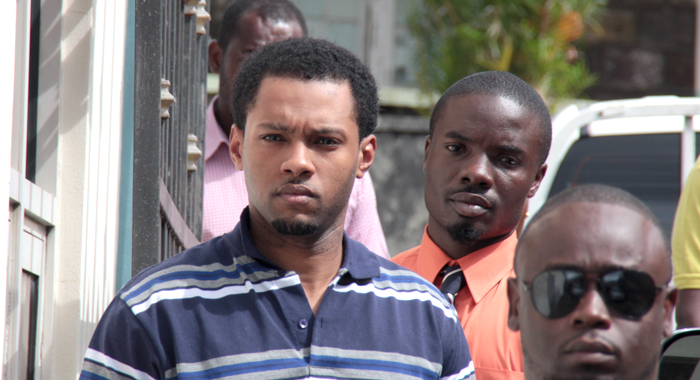 In this April 22, 2016 photos, murder accused Veron Primus, left, appears in court, charged with Greaves’ murder. He is escorted by detective Constable Edmond Ollivierre, the lead investigator, who testified on Tuesday. (iWN photo)

A stone-faced Veron Primus, clutching two plastic shopping bags containing what looked like clothing, appeared at the Serious Offences Court in Kingstown on Friday, where a charge of murder was read to him.

The Vermont resident, who grew up in the United States, is charged with the murder of 33-year-old real estate agent Sharleen Greaves, which occurred between Nov. 12 and 13 last year.

Greaves was found dead in her Bijou Real Estate office in Arnos Vale on Nov. 13, with multiple stab wounds about her body.

Primus was not required to plead to the indictable charge when he appeared before Chief Magistrate Rechanne Browne-Matthias.

Bail was also not opened to him, as is the case with accused murderers.

The 29-year-old unemployed man has been remanded into police custody until July 18, 2016 for a preliminary inquiry.

During the preliminary inquiry, a magistrate will determine if the prosecution has enough evidence against Primus to send the case to the High Court for a judge and jury trial.

Senior Prosecutor Adolphus Delplesche told the court that the Crown intends to call 40 witnesses during the preliminary inquiry.

The Magistrate said the two-month adjournment should give the prosecution enough time to come up with a more realistic list of witnesses.

Police brought the murder charge against Primus in light of evidence they uncovered while investigating his alleged abduction of Mewanah Hadaway, with which he had a brief relationship, which ended late last year.

Hadaway, a 24-year-old resident of Vermont, has told detectives that Primus held her against her will in the basement of a house in Vermont from Jan. 1, 2015, until last Friday, April 15.

Police were summoned to the house last Friday when the caretaker of Primus’ elderly adoptive grandmother found a note inside an insulin box in a refrigerator saying that he was keeping Hadaway captive in the house.

Among the persons waiting outside the court to get a glimpse of the accused on Friday was Greaves’ mother, Inether Bailey-Holder.

She declined a formal interview with reporters but said she had thought that she would have felt better now that someone was charged with the murder of her first daughter.

Bailey-Holder, however, said that she was so affected that she was unable to eat and was still angry at the death of her daughter.

The mother wore under her blue blouse a memorial t-shirt emblazoned with Greaves’ picture, which was printed after her death.

She wore the t-shirt under her blouse, she said, because she was not sure it would meet the approved attire for court.

Detectives are said to be continuing their investigation into the Primus’ alleged abduction of Hadaway.

The allegations and charge against Primus have shocked residents of Vermont, including some of his childhood friends, with whom he grew up before moving to the United States.

“The video made me cry. We grew up together. The reality of the situation came home,” a female resident of Vermont told iWitness News on Friday after watching a video we posted on Facebook of Primus leaving the court precincts.

“It is sad to think that someone you thought you knew, can be like this or can do these things; it is troubling,” the resident further said.

Sources have told iWitness News that the investigation by the Vincentian detectives may have also unearthed information relevant to a 10-year-old murder case in the United States for which Primus was the main “person of interest”.

Pix11 News in New York reported on Friday that the family of 16-year-old Chanel Petro-Nixon — an honours student who was found strangled in a garbage bag on a Brooklyn sidewalk in June 2006 — was in seclusion Friday, after learning that Primus, the main “person of interest” in her murder, was charged with Greaves’ murder on Thursday.

The North American news outlet said Friday that there are eerie similarities between Petro-Nixon’s case and the alleged abduction of Hadaway in St. Vincent.

NYPD investigators always believed that the teenager was held captive for several days, against her will, before she was strangled to death and placed in a garbage bag, PIX11 reported.

However, police in New York, initially, did not have DNA evidence to tie Primus to the crime.

In the years after Petro-Nixon’s murder, Primus was accused by two, different women of sexual assault but acquitted at trial.

He later went to state prison in New York for violating an “order of protection” taken out by an ex-girlfriend and was deported to St. Vincent after serving his prison term, PIX11 reported.