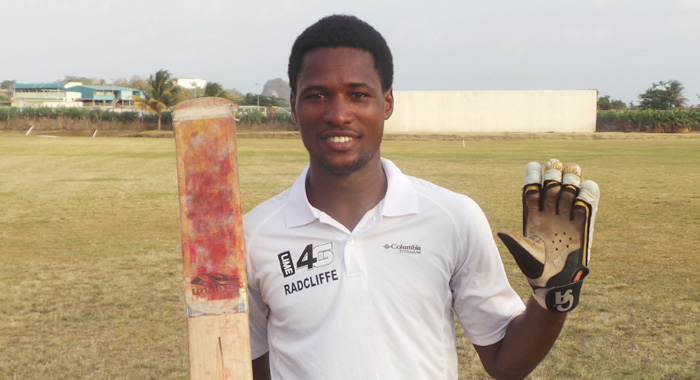 A magnificent century by Rodney Lawrence and a nine wicket match haul by offspinner Dyke Cato propelled LIME Radcliffe to an impressive innings and 30-run victory over Guardian General Saints in their National Lotteries Authority Premier Division match at the Sion Hill Playing Field on the weekend.

LIME Radcliffe went into the weekend’s fixture on 44 points courtesy of two victories from their two opening matches and wasted little time in moving into the driver’s seat thanks to Lawrence’s superb knock.

He arrived at the wicket with his team uncomfortably placed at 39/2 after Romano Pierre (5) was caught off Ray Charles and Kadir Nedd (26) had his middle stump removed by Kenroy Peters. Lawrence survived some close shouts for LBW off Peters but settled in on a pitch that served up little peril. He added 57 with Urnel Thomas (22) for the third wicket and when captain Lindon James (7) was stumped attempting a big swipe at Romel Currency added a further 90 with Richie Richards for the fifth wicket.

The tall right-hander with a wide array of shots was not afraid to hit the ball in the air against pace or spin in his innings of 113.

He should have been caught when in his seventies but Charles floored an easy catch at short extra cover off Currency. His partnership with Richards (49) saw LIME Radcliffe taking the ascendancy as the pair not only occupied the crease but dominated the bowling-taking 19 overs to compile the runs.

Richards batted 81 minutes, faced 61 balls struck 2 fours and 2 sixes before he was bowled by part offspinner Sunil Ambris (3/14) with the total 200/5.

Lawrence was the last man to be dismissed when he held out off Ambris after batting 146 minutes, facing 213 balls, striking 7 fours and 6 sixes.

Guardian General Saints who were on 46 points from their two victories as well and hoping to extent that with a good performance when they began their innings on Sunday were routed for 51 in 22.2 overs with Cato 5/31 and James 3/3 with his medium pace.

Having failed to save the follow on, Guardian General Saints were asked to bat a second time and, despite showing a little more fight, were dismissed for 162 with Zaine Edwards holding the innings together with an accomplished innings of 64.

But while Peters (22) tried to bat his team to safety the lower order proved inept at keeping out Cato (4/74), Othneil Lewis (3/24) and Johnson who had thrown off the stress of an expectant father and replaced it with being a proud dad of a baby girl.

The last rites were administered when Peters was caught off Lewis.