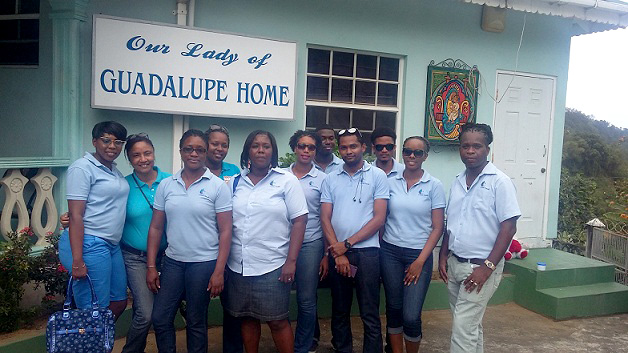 Coreas Activities Club members outside Guadalupe Home for Girls after their visit.

Reaching out to those in need and operating outside of their usual scope of work. Those were the main focus of the members of the Coreas Activities Club who ventured out last Saturday to make contributions to two institutions, Liberty Lodge Boys Training Centre and the Guadalupe Home for Girls.

Each employee was asked to make a personal contribution towards the initiative.

The first stop was made at the Liberty Lodge Boys Centre, now located at the Dauphine Community Centre.

Nine students ages 9 to 14 are being housed there. They were each given a gift package, which included personal care items, notebooks, pens and pencils. A quantity of food items, clothing and toiletries were also handed over to Deputy Director, Anita Ralph to assist with the daily needs of the institution.

House Mother Colma Durrant was also present during the handing over. She joined Ralph in expressing much appreciation.

They stated that it was highly commendable for the Coreas activities Club to reach out in such a tangible way in addition to spending time interacting with the students.

They also expressed an open invitation for return visits and mentorship of the students.

A resident of the Centre thanked the group for the visit.

“I am very thankful for the gifts we got today. We were surprised, although we knew that some people from Coreas were coming we didn’t know that we were going to receive gifts. I am feeling really good,” he said

The Coreas team was officially welcomed by the House Mother Donette Dowers.

This was followed by the girls rendering a song which touched the hearts of all present.

A few solo acts by some of the girls and Coreas Hazells staff was also shared.

This set a very fun mood for the remainder of the evening.

Each member of the Coreas Hazells team presented gifts to the girls present. The gift packages, which included personal care items and snacks, were presented to the 18 occupants with ages ranging from 13 to 17.

A basket, which included clothing, food items and toiletries, were presented to the House Mother as a contribution to the home’s daily needs.

The interaction that followed between the girls and the club members were filled with much fun and making memories.

The girls expressed much appreciation for the visit as they were able to get a confirmation that the Coreas team will make a follow up visit.

When asked about how she felt about the day’s event, President of the Coreas Activities Club Kathy Harry said: “I was emotionally overwhelmed, the things that lots of us take for granted created such excitement on the faces of these young people today. It was really a worthwhile venture and a day well spent, we know that we will make that promised return visit, a reality.”