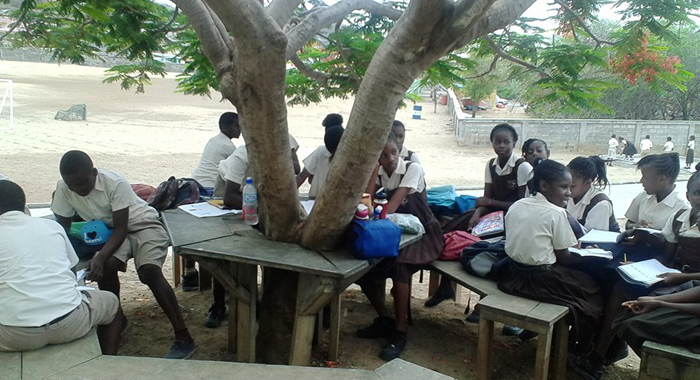 The shade of a tree has become the classroom for Grade 6 students at the Canouan primary school. (Photo: Facebook)

Grade 6 students and two other classes at the Canouan Government School are taking lessons outside of their classroom two week before they write examinations that will determine which of the nation’s secondary schools they attend in September.

The 19 Grade 6 students and their teacher were forced to abandon their classroom last week Monday after cracks that had begun appearing in the school building worsened.

Grade 1, which has some 25 students and Grade 5, which has 15 students, are also having classes outside of the building because of similar cracks in their classrooms.

iWitness News was also reliably informed that cracks have also appeared in the school’s computer lab.

A source told iWitness News that there are “severe cracks” in the building.

Further, the floor in the Grade 5 classroom has sunken to the point that the teacher cannot stand at the chalkboard.

The Grade 6 students were initially moved to under a tree to the front of the school, while the Grade 1 students were having classes on the steps.

However, because of the intensity of the sun, the Grade 6 students were moved to the hardcourt, which has a pavilion and is cooler.

The principal of the school, however, instructed the teacher to bring back the children, because the hardcourt is off the school compound.

The teacher was instructed to go to the computer lab, but iWitness News understands that the teacher was concerned about the safety of that classroom, in which cracks have also appeared.

Additionally, the computer lab is being used to stored plastic bottles that the school has collected as part of a competition being held by a recycling firm.

iWitness News understands that someone from the marina that is being built in Canouan inspected the school building and described it as “dangerous” and then contacted the Ministry of Education.

On Friday, a plumber, an electrician, another person with a video camera and someone taking notes visited the school.

iWitness News understands that the staff was told that the management of the school has to wait on the Ministry of Education for instruction on what to do about the situation.

A source told iWitness News that teachers are trying to cope, but the students are more easily distracted now that they are outside of the classroom.

Terrance “Terry” Bynoe, a community activist in Canouan, said he has visited the school and decided to keep his child at home.

“I have visited the government school this morning, very bad situation I have kept my child at home, please do not send your children to be killed in my humble opinion, teachers please contact your teachers union and go on strike, can we have the churches to allow school to be held in your building please,” Bynoe said in a post on Facebook on Wednesday.

iWitness News contacted the Ministry of Education on Thursday and was told that Minister of Education St. Clair Jimmy Prince and other senior education officials were in a meeting with a team that is visiting from overseas.

3 replies on “Canouan students taking class under a tree”