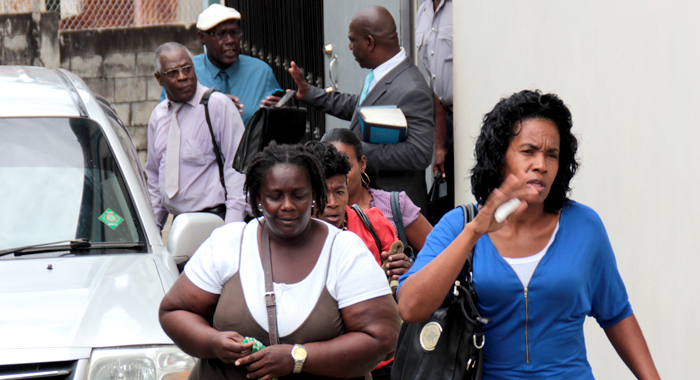 Simone Ballantyne, right, and Metheline Alexander leave the Serious Offences Court on Wednesday after testifying in the preliminary inquiry into the death of their children at Rock Gutter. (IWN Photo)

Senior Prosecutor Adolphus Delplesche on Wednesday used humour, compassion and references to his extensive knowledge of Fancy and its residents to try help witnesses through “stage one of this painful exercise” that is the preliminary inquiry in the case in which two men are being tried for causing the death of seven students at Rock Gutter on Jan. 12, 2015.

The charges came at the end of a coroner’s inquest last year into the death of the students, who died when a minibus plunged down a steep incline and went into the raging seas at Rock Gutter, an uninhabited area between Owia and Fancy on St. Vincent’s east coast.

At the start of the preliminary inquiry at the Serious Offences Court in Kingstown on Wednesday, Delplesche informed the court that the prosecution would not be proceeding against Bowens.

On Wednesday, the court heard testimony from surgical pathologist Tracy Bernard, one of the two physicians who conducted the autopsies on the bodies of the five students.

Shelland Hoyte, a registered nurse, who was the only adult on the minivan besides the driver and conductor, also testified.

The witnesses, except the pathologist and Alexander, cried as they testified and Delplesche stood close to the witness box, at times handing to the witnesses neatly folded sheets of tissue.

At one point, he also handed some tissue to Inspector of Police Hezron Ballantyne, father of Simonique Ballantyne, who was sitting in the audience as his wife testified.

Tears were streaming down Ballantyne’s face, and Delplesche, a former police officer, handed him some tissue, saying, light-heartedly, “Don’t kill yourself.”

A legal expert told iWitness News that the testimonies of the parents were essentially a formality to establish the fact that the students are dead or, in the case of the two whose bodies were never recovered, are reasonably believed to have died.

As the proceedings went along, Delplesche changed his approach, stating certain facts and asking the parents if that were the case, rather than having the parents recount all of the painful details, some of which was not admissible into evidence.

Therefore, rather than asking, for example, “What was done with the body of your son?” he asked, “Is it true that your son was buried at the Fancy Cemetery on January 25th, 2015?”

The defence did not cross-examine any of the witnesses.

Myers is being represented by lawyer Grant Connell and Nanton by Israel Bruce.

During the proceedings, Myers, a towering figure, stood to the right of his co-accused, who is below average height.

Myers kept his eyes closed for long period during the proceedings, and, when asked by the magistrate if he was OK and whether he would like to sit, he said he was fine and declined the offer to sit.

Edwards, who is pregnant, also declined the magistrate’s offer of a seat during her testimony.

The proceedings have been adjourned to Aug. 8, when the court is expected to hear the testimony of the surviving students.

Before the adjournment, Delplesche told the court that they have completed “stage one of this painful exercise”.

He said that most of the remaining witnesses are students, who would be undergoing examination soon, and suggested that the preliminary inquiry continues during the summer vacation.