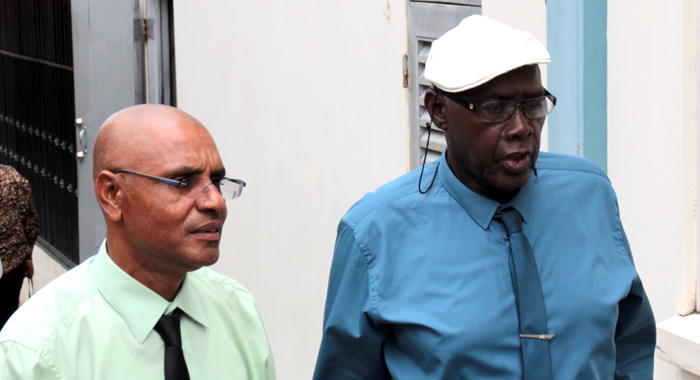 School principal Colbert Bowens, left, was Wednesday freed of a charge in connection with the death of seven students. He chats with Pastor Ehud Myers, who is still before court on the same matter. (IWN photo)

One of the three men who were charged in connection with the death of seven students in a minibus accident on Jan 12, 2015 has been freed.

At the start of the preliminary inquiry on Wednesday, the prosecution told the court that they would not be proceeding against Colbert Bowens, a 51-year-old principal.

Bowen’s lawyer, Duane Daniel, told iWitness News on Wednesday that it is within the purview of the prosecution and the Director of Public Prosecution to assess matters, which he said they usually do “clinically”, and to decide how to proceed.

Daniel said he was happy to see that they arrived at “a fair decision under the circumstances” and have withdrawn the charge against his client.

Bowens stayed for the preliminary hearing against the other two accused, 67-year-old pastor Ehud Myers and 36-year-old chauffeur Davanan Nanton.

At the end of Wednesday’s proceedings — in which the court heard testimony from the pathologist, the only adult who was on board the van and the parents of the deceased children — Bowens told iWitness News that he had no comment to make about the charge against him being withdrawn.
Myers and Nanton are jointly charged that by omission they caused the death of Racquel Ashton, Chanstacia Stay, Glenroy Michael, Jamall and Jamalie Edwards, Simonique Ballantyne and Anique Alexander.

They died when a minibus in which they were travelling to school plunged down a steep incline and went into the raging seas at Rock Gutter, an uninhabited area between Rock Gutter and Fancy in northeastern St. Vincent.

Myers is being represented by lawyer Grant Connell and Nanton by Israel Bruce.