Players looking to second trial in bid for Windwards picks 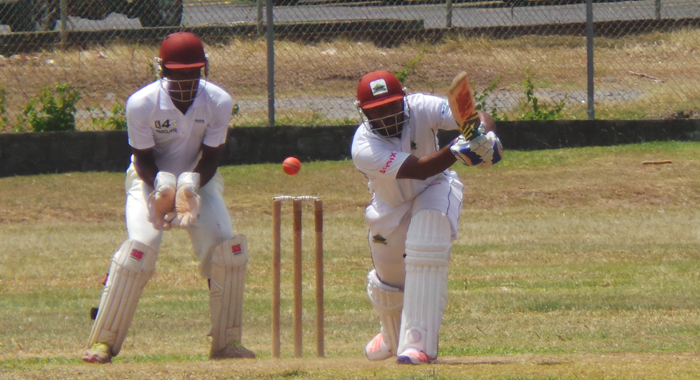 Some players will be looking to next week’s second trial match to stake a claim for a place in the SVG 13-man squad to for the 2016 Senior Windward Islands cricket championship set for Grenada later this month.

While some players got among the runs and wickets, some were left uncertain of their future after failing to enhance their chances in the match, which ended in a draw.

The two-day match played between teams captained by Miles Bascombe and Sunil Ambris at Arnos Vale 2 saw 3 half-centuries and 5 scores in the forties.

The Ambris X1 were set on course for a big total when Daron Greaves (19) and Rickford Walker (41) raised 67 for the opening partnership.

And even though they both went within 5 runs of each other and with Marvin Small (14) also going cheaply, the two former West Undies U19 players reclaimed the initiative with some sensible batting.

Ambris (83) added a further 44 with Casmond Walters (43) and was LBW by Bascombe at 287/5. Asif Hooper got 28 before the declaration came, with offspinner Kenneth Dember 3/130 and part-timer Bascombe 3/67 collecting the wickets.

Bascombe X1 lost the early wicket of Windwards U19 opener Romano Pierre (7) with the total on 13, LBW to the pacey Shaquille Browne. Atticus Browne (43) and Donwell Hector led a recovery with a partnership of 80 for the second wicket before the former held out at deep midwicket. Bascombe (1) went two runs later and Hector (41) was comprehensively bowled by the left-arm spin of Hooper at 119/4.

Rodney Lawrence (35) continued his good middle order form while Dember (41) showed his ever improving credentials with the bat.

Walters bowled his drifters steadily to finish with 3/28 from 11overs, while Hooper a 3/52 and Shaquille Browne 2/38 did themselves no harm.

Batting a second time, Ambris X1 ended 135/4 with Walters thumping the selectors with an unbeaten 53 made off 50 balls with 6 fours and 3 sixes. Ambris was unbeaten on 35 while Greaves made 28.

In 2014, despite scoring a century and to half centuries in the trials, the selection panel omitted Walters. In fact, reports say that when the panel left to select the team, Walters was unbeaten in the 70s but still could not find favour.

Last year, despite scoring the most runs in the local competition, Carl Joseph Law Chambers ASCO captain Desron Maloney could not break into the SVG first 11 even as players were failing with the bat. His omission resulted in one of his club mates, Roger Gibson staging a one man protest on his behalf during the Windwards tournament. Maloney, who missed most of the first trial match owing to out of state commitments, is expected to be available for next week’s match scheduled for the main Arnos Vale Playing Field on Tuesday and Wednesday.