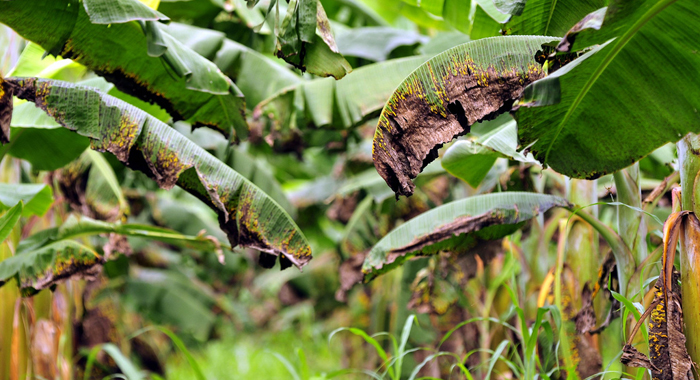 Our bananas are still infested with Moko disease (Bacterial wilt) and Black Sigatoka (black leaf streak). There can be no doubt that there are even scarier things out there to be aware of.

Moko disease is caused by a bacterium, Ralstonia (Pseudomonas) solanacearum (Race 2) which had evolved from a bacterial pathogen of wild heliconia species. The disease kills the plant, cannot be cured by any chemical and is spread via seedlings, plant tissues, in soil, on tools and by insects.

Black sigatoka is a leaf-spot disease of banana plants caused by the ascomycete fungus Mycosphaerella fijiensis (Morelet). Black Sigatoka is a leaf spot disease of banana that can cut a tree’s fruit production in half. M. fijiensis reproduces both sexually and asexually, and both conidia and ascospores are important in its dispersal. The conidia are mainly waterborne for short distances, while ascospores are carried by wind to more remote places (the distances being limited by their susceptibility to ultraviolet light).

Now our banana farmers are in for another lashing if the disease Fusarium banana wilt (Panama disease) comes here. This is a lethal fungal disease caused by the soil-borne fungus Fusarium oxysporum f. sp. cubense (Foc). The fungus enters the plant through the roots and colonizes the xylem vessels thereby blocking the flow of water and nutrients. Disease progression results in the collapse of leaves at the petiole, the splitting of the pseudostem base and eventually plant death. Once established in a field, the fungus persists in soil for an indefinite period of time and cannot be managed using chemical pesticides. The solution best adapted to the continued production of bananas in infested soils is replacing susceptible cultivars by resistant ones. Fusarium wilt is the first disease of bananas to have spread globally.

It is time right now for the Ministry of Agriculture to ban the import of all growing plants to ensure that Fusarium wilt is not introduced to the country. It may also be prudent to ban the sale of all potting soils and bagged soils and such unless they have been pasteurized by heat or steam treatment.

That includes banning export flower growers from importing root stock. There must be no movement of such across our borders; none whatsoever.

Fusarium wilt has no cure and there are no known chemicals that can be used to eradicate the disease once established.

There are varieties and sub groups of certain varieties which are resistant to Fusarium wilt. The pathogenic isolates are classified into races based on the cultivars on which they cause disease. For example, the isolates that affect cultivars in the Gros Michel, Silk and Pome subgroups, among others, are classified as race 1. When Cavendish cultivars exhibiting symptoms of Fusarium wilt were first observed, the isolates were classified as race 4. They were later subdivided into subtropical race 4 (STR4) and tropical race 4 (TR4) to distinguish the strains that need predisposing factors to cause the disease from the ones that don’t. The race concept has been criticized for being an imperfect measure of pathogenic diversity, but it is still considered useful to describe host reaction and new disease outbreaks.

The Taiwanese are one of the world leaders in trying to tackle the problem with resistant cultivars.

The fungus is commonly spread through infected planting material, infested soil and water.

Symptomless but infected suckers or rhizomes can transmit the disease when planted in a new area. Infected planting material is often responsible for the local, national and international spread of the disease. Certified tissue-culture plantlets should be free of the fungus and would not contribute to the spread of the disease.

The fungus can persist in soil for decades, even in the absence of bananas. It can survive in infested plant debris and in the roots of alternative hosts. Staff and visitors to a banana plantation have the potential of moving the fungus in or out through infested soil attached to vehicles, tools and shoes. Untreated soil used as a potting medium can transmit the fungus and animals can also move around fungal spores present in soil.

Spores can be carried in surface run-off water. They can also contaminate irrigation reservoirs.

The fungus cannot be controlled using fungicides and cannot be eradicated from soil using fumigants. Drainage, environmental conditions and soil type influence host-pathogen interactions. Soils that suppress the disease have been reported in Central America, the Canary Islands, Australia and South Africa. However, the chemical, biological and physical factors responsible for this phenomenon are not well understood.

In disease-free areas, using tissue-culture plantlets will prevent the spread of the disease through planting material. How long the plantation remains productive will depend on the efficiency of the quarantine and exclusion measures implemented to prevent the entry of the pathogen. Crop rotation is not a viable option unless the non-banana crop has anti-fungal activity. Otherwise the fungus, which can survive for decades in soil in the absence of a host, will attack bananas as soon as they are replanted. In China, farmers have been able to grow bananas in the presence of TR4 by rotating them with Chinese leek (Allium tuberosum).

ULP re-election and the destruction of SVG’s economy