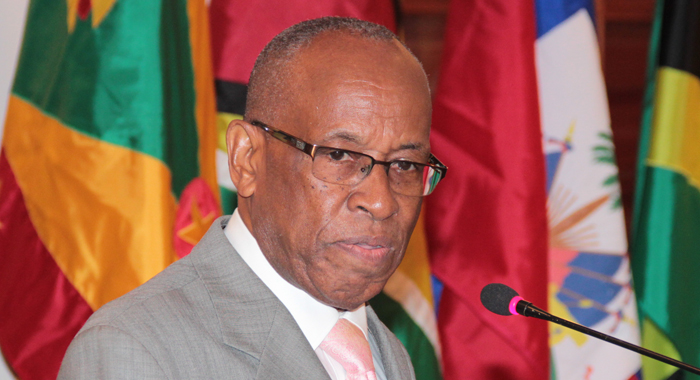 St. Vincent and the Grenadines’ Deputy Prime Minister, Sir Louis Straker told the opening ceremony of the 19th meeting of CARICOM’s Council for Foreign and Community Relations (COFCOR) that an assessment must be made of CARICOM’s position in light of the changing nature of the U.S.-Cuba relations.

“The Caribbean has long been a staunch ally of and advocate for the Cuban people and, as such, we must ensure that we are prepared so as not to be left behind when changes are effected in the way of doing business with Cuba,” said Sir Louis, who is also the island’s foreign affairs minister.

The incoming COFCOR chair said it is incumbent on CARICOM to consider ways in which the 15-member regional grouping may “more closely secure the ties that bind us with Cuba in a mutually beneficial manner that can start with the simple invitation to be heard at our table.

“I put this forward as something we may wish to consider over the course of this meeting,” Sir Louis said.

The Guyana-based CARICOM Secretariat said that the meeting will provide the ministers the opportunity for a periodic review of a range of diplomatic matters involving CARICOM’s relations with Third Countries and International organisations.

“COFCOR will examine the implications for the Caribbean Community of several emerging issues including the reshaping of the United States relations with Cuba and the pending British referendum on European Union membership.

St. Lucia’s Foreign Minister Alva Baptiste, the outgoing COFCOR chair, also addressed the issue of the new U.S.-Cuba relationship, saying that “over the next two days, we will be called upon to adumbrate the issues surrounding the normalization of U.S.-Cuba relations and how this will impact our community”.

CARICOM Secretary General Irwin LaRocque, said the move toward normalisation of relations between the U.S. and Cuba represents a welcome development in hemispheric relations.

“That development will form the theme of our retreat later today. The discussions there will take place against the background of our longstanding, strong and friendly relationship with Cuba,” he said.

LaRocque said that in the dynamic and rapidly changing global environment, CARICOM must maintain and depend traditional relationship, even as it builds new ones.

He mentioned the African Caribbean and Pacific (ACP) summit to be held in Papua New Guinea at month end, saying, “our meeting today will have to consider those issues as we formulate a position to present at that summit”.

Sir Louis said that the meeting comes at a time when the Westphalia concept of a sovereign nation state is constantly being challenged by forces that operate independently of national governance.

“The time in which we operate is characterised by the escalation of transnational crimes, terrorism, climate change and its attendant problems, global and multilateral coalitions in the spheres of social justice, the expansion of non-state actors, and issues of governance, to name a few.

“The realities of the pervasiveness of the reach of the internet and social media have effectively transformed the term sovereignty in the context of the nation state.

“In order to be relevant in an increasingly borderless world where non-state actors can threaten a state, the idea of security is gradually considered more expansively. In addition to traditional security threats, governments and governance infrastructures now battle daily with technological security, economic challenges, food and health security in areas that were once deemed safe havens,” he said.

In his address Baptiste also noted the challenges facing CARICOM, adding that the region is going through a period of dynamic developments and cataclysmic changes in the environmental, economic, social and political constitution of the world.

“Our region, the Caribbean, is not spared the effects of such changes but in some instances, we have felt the full force of those changes, be it at the hands of nature or by the action of those more developed countries that are yet to appreciate and respond appropriately to the vulnerabilities of our small island developing states.

“These occurrences, notwithstanding, are not insurmountable and it is definitely not a time to fold our arms like defeated soldiers or engage in unnecessary jeremiads.  I wish to state categorical that we shall not confront those changes with dread and confusion but with confidence and conviction,” he said.

The meeting comes on the heels of last week’s Ninth UK-Caribbean Forum in The Bahamas and CARICOM foreign ministers will devote part of their meeting to discussing the critical elements emanating from that engagement.

The meeting will also discuss border issues, and a range of bilateral topics involving Mexico, Cuba and the Nordic States, and the Unites States.

One reply on “CARICOM foreign ministers focus on US-Cuba ties at meeting in St. Vincent (+Video)”