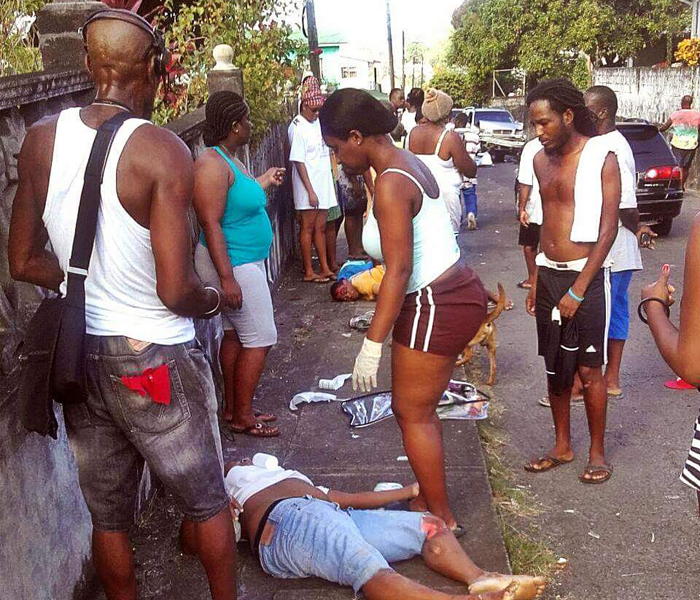 Persons assists the injured pedestrians at the scene of the accident on Sunday.

The Traffic Department on Monday confirmed that they have someone in custody as they continue their investigation into the vehicular accident at Lodge Village on Sunday, which has left three members of a family in hospital.

Head of the Traffic Department, Superintendent of Police Kenneth John, confirmed to iWitness News that police has a male in custody.

John declined to comment on reports that there is controversy surrounding who was in fact driving the vehicle when it crashed into the pedestrians.

He, however, told iWitness News that police have launched an investigation into the accident and has a male in custody as part of that investigation.

He said that Michelle Shearman, her boyfriend Carl Roberts and their 7-year-old, Adam Roberts, were injured when motor vehicle, RV242 crashed into them about 8 a.m. while they were walking along the Lodge Village Public Road.

John said that the vehicle is owned by Leslie Aston of Antrobus Rentals, and was rented to Brad Elliot Nanton of Sandy Bay.

The traffic chief further said that the vehicle was travelling towards Kingstown and the pedestrians were walking in the opposition direction.

iWitness News understands that Nanton has said that he gave the vehicle to another person to drive and that person was driving at the time of the accident.

Well-placed sources have told iWitness News that the person who Nanton reportedly gave the vehicle to drive is denying that he was at the wheel at the time of the accident.

iWitness News was also reliably informed that the alleged driver does not have a driver’s license, and left the scene after the accident.

Sources say that the older male pedestrian’s condition is listed as “critical”, while the other two are still in hospital, but there condition is more stable.