Women on top as Vincy Mas kicks off 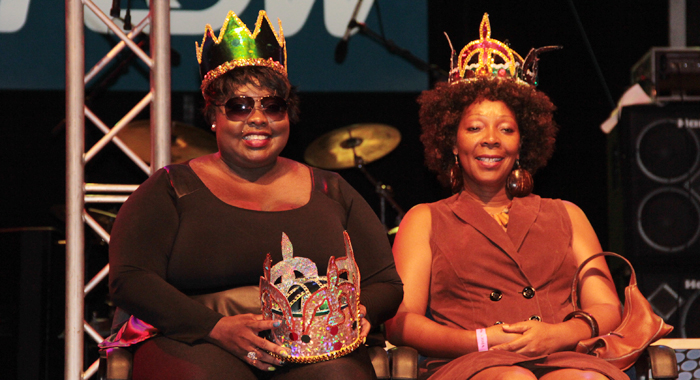 Women emerged winners in the three categories of the Best New Song Competition amidst boos and shouts of “cheat” as the results were announced at the launch of Vincy Mas 2016 at Victoria Park on Saturday.

Females were outnumbered two to one in each category of the competition, but made up in performance for what they lacked in numbers.

But while the women dominated, Aurella “Kahalia” Beache was twice the winner, bagging both the Ragga and Power Soca categories of the competition.

In the Ragga Soca segment, Kahalia showed Ozarie Matthews that, unlike his three Caucasian dancers, she would not obey his calls to “Bend Ova”.

Her “Aye” made it clear also to Kamara “Keido” Foster that she would take no “Frass” from him.

The songstress also had a complete “Take Over” of the Soca segment, putting the brakes on Kingsley “Hero” Roberts’ efforts at “Pressing Gas” towards the soca crown.

While Bernard “Mentalis” John’s “Hands Keep Jumping” towards the crown, Kahalia showed him that she had indeed completed a take over of the competition.

In the calypso category, Cleo “Cleopatra” Hendrickson’s “Love and Respect” won the judges’ nod ahead of former national Calyposo Mnarch Grantley “Ipa” Constance’s “For Better or for Worse” and Hero’s “Fourth Term”.

Some patrons towards the front of the stage were obviously not pleased with the judges’ decisions and booed Kahalia as she was announced winner of the Ragga Soca competition.

“I’ve got the money,” she mouthed to them, rubbing her fingers together in a motion that indicated possession of cash, an apparent reference to the price money in the winner-take-all competition.

The artiste further gave her detractors “the royal wave”.

In a post on her Facebook page on Sunday, Kahalia said that she won “despite being sick and hardly any voice”.

She added: “I’ve never won the soca segment and I’m ecstatic that I did. With that said, I am done with Best New Song, I’ve won in all THREE segments now…time to move on.” The artiste also complemented the other competitors, saying:

“Big up my fellow competitors on jobs well done and all the best to you guys for rest of season.

Congratulations to Cleopatra Hendrickson for winning the Best New Calypso.”

There were also appearances by mas bands and performances from two steel orchestras.

The contestants in the Miss SVG 2016 pageant also made an introductory appearance.