Novice go big in last round of Police T20 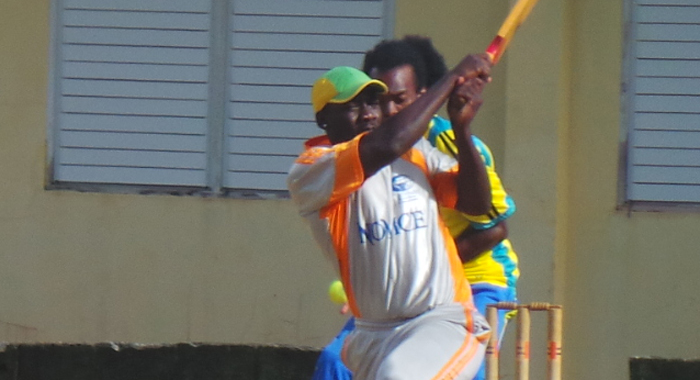 Former champions C.G.M. Gallagher Novice and Bank of SVG All Stars recorded comprehensive victories, while Owia Young Strikers collected easy points when the last round of matches in the round robin stage of the 2016 SVG Police Co-operative Credit Union Clinchers T20 softball tournament took place on the weekend at the Richland Park Oval.

On Saturday, Owia Young Strikers took full points without raising a sweat after their opponents KLT Strikers failed to show up for their match.

In the second match, C.G.M Gallagher Novice hit the season’s highest total on the way to inflicting a 104-run defeat on Rogers Photo Studio Fya ONE.

Batting first, C.G.M. Gallagher Novice behind half centuries from Casmond Walters and Newborn Joseph reached 200/6 in their 20 overs.

Walters smashed 68 with 8 sixes and 2 fours while Joseph scored 67* with 9 sixes and 2 fours. They added 86 for the sixth wicket. Israel Baptiste, amid all the carnage, took 2/8 from four overs.

Rogers Photo Studio Fya 1, needing to score at 10 runs an over, were never in the picture and fell for 96 in 17 overs with Israel Baptiste getting 44 with 6 sixes and 2 fours opening the innings.

On Sunday, Bank of SVG All Stars beat Rate Yo Boys Challengers by 121 runs.

Batting first, Bank of SVG All Stars were dismissed for 169 in 20 overs with opener Ron Adams getting 72 with 7 sixes and 2 fours.

Rate Yo Boys Challengers were never up to the fight and were dismissed for 48 in 15.4 overs.