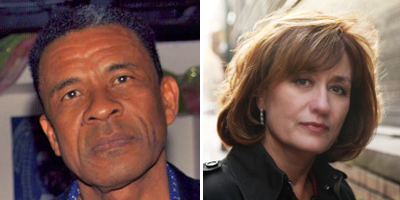 A Vincentian diplomat has asked an American journalist to donate a barrel of foodstuff to two elderly Vincentian women as compensation for allowing her to film in their house while working on a story in St. Vincent and the Grenadines.

The U.S. journalist, Mary Murphy, came to St. Vincent two weeks ago to report on the story of Veron Primus, who has been charged with the murder of real estate agent Sharleen Greaves, and the kidnapping of Vermont resident Mewanah Hadaway.

Primus is also a person of interest in a 2006 murder case in New York, and Murphy came to St. Vincent as part of her continued coverage of that story.

During her visit to St. Vincent, she interviewed Primus’ great-aunt on camera on the ground floor of her two-storey home in Vermont.

Murphy’s crew also shot footage of inside a refrigerator where Hadaway reportedly placed a note that led to her rescue.

But Fitz Huggins, St. Vincent and the Grenadines’ Consul General in Toronto, seemed displeased with some of the footage that Murphy recorded and used in her story.

“We all want the [alleged] murderer convicted but not on the back of an old woman who is helpless. Please, where is our decency? Who stands up for decency? Do you think Mary would allow a television network to enter her house and show those images to the world?? . Tell me how this story helps in any way to solve the crime, please. So when you beating me up just remember this Vincy don’t back down from nobody and I am not afraid to stand in support of the poor,” he further said.

His comments followed after an intervention by Vincentian Rae Dawne, who said in her post that the Vincentian diplomat “ate his school fee and is a national embarrassment”.
In another comment, Higgins further wrote:

The women live in a two-story house, the ground floor of which is concrete and the upper structure wooden.

Huggins, however, did not say whether he or anyone in the ruling Unity Labour Party had known about the house during the lead-up to the December 2015 general elections and whether a suggestion was made that some of the millions of dollars in building material that was given away then be given to the women to help repair the house.

Murphy told iWitness News on Wednesday that she had seen Huggins’ comment.

“I saw the comment, and I left it on my Facebook page, because everyone has a right to free speech,” she said.

She also denied earning additional money because of the story.

“I did not make a pretty penny on this story. I get paid a salary by PIX11, the New York television station that employs me. It’s my job to seek the truth, and I thank Ms. Lily Grant for the interview she graciously gave me,” Murphy further told iWitness News.

While a few persons “liked” Huggins’ comments, he was roundly criticised for them.

“I believe that Mr. Huggins either misspoke or lack understanding of not only Ms. Murphy’s role, responsibility, manner of compensation but contribution to SVG.

“I addressed him because I believe that his position does not allow him the luxury of such lack of understanding or callous dissemination of misinformation,” wrote Camille Janiffa Bradshaw.

“1. Asking for contributions to repair a home when there are resources already in the country to do so is unbecoming. Even if there was a natural disaster and thousands of homes damaged the request was misplaced.

“2: Ms Murphy is a Broadcast journalist/investigative journalist. At times she may be a producer which she clearly stated on this piece that she has producers. We do not know the details of her contract therefore to assume that she benefited substantially is ignorant and rude. She has no further obligation. She did ENOUGH.

“3: To ask for not only repairs but food for a lady who is burdened with medical care that is now further hampered by mental health care is atrocious. The “gesture” is misdirected.”

In another post on Murphy’s Facebook page on May 9, Huggins asked her to help promote Vincy Mas.

“Mary Murphy, SVG loves you. Help us to use your page to promote Vincy Mas, the Hottest Carnival in the Caribbean. June 24th to July 4th. We are a safe country with friendly people. Come for the Carnival and Stay for the fun. St Vincent and the Grenadines has the best sailing waters, great beaches and the Carnival is definitely one to experience,” Huggins wrote.

Huggins, a former marketing executive at a telecommunications company in SVG, was appointed a diplomat in 2013.

Some observers say that his diplomatic appointment was to quell his political ambitions.

During his ambassadorial stint, he has been instrumental in securing the donation of medical supplies to SVG.

Most recently, he was instrumental in raising funds in Canada to build a house for a woman in North Leeward who was initially overlooked by the government for a new house, after her home was destroyed in the December 2013 floods.