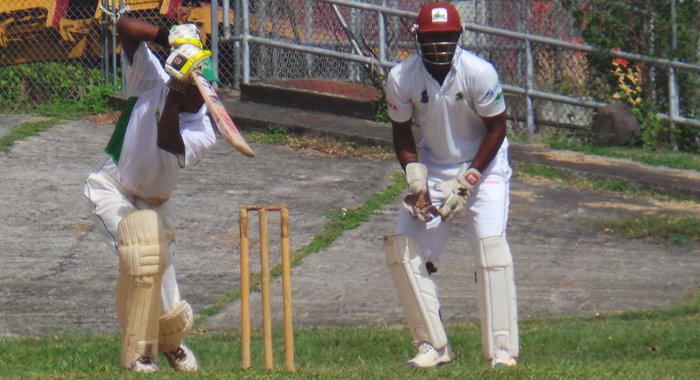 Captain Donwell Hector (26) and Browne then added a further 51 for the second wicket to see the total 144/2 before the captain, recklessly swinging at offspinner Andrew Emtage (3/121), was caught at deep midwicket.

Chrisroy John (52) joined Browne and the pair set about the bowling in adding 93 in just over an hour and a quarter, before John held out at long off at 237/3.

Lauron Francois replaced John and took a different approach in turning over the strike and setting his team on course for a major total.

He, however, lost Browne (132) just before the close when the batsman lofted a catch to deep midwicket. The opener batted 222 minutes, faced 146 balls and struck 13 fours and 5 sixes. He survived one chance when Sunil Ambris failed to hold onto a return catch with the batsman on 68.

On Sunday, former West Indies seamer Kenroy Peters, who saw limited bowling on day one after arriving late owing prior to commitments, proved a handful for the remaining Victors 1 batsmen. The experienced left-armer, bowling a nagging length on a batsman-friendly pitch, finished with 5/35 from 13.5 overs. Francois (44), the only wicket not collected by the marauding Peters, was caught off pacer Ray Charles.

Guardian General Saints, undaunted by the challenging total, set about with confidence and saw openers Rickford Walker (40) and Vincent Cupid (32) raising 81 for the first wicket. They, however, went within one run of each other, dismissed by the offspin of Bascombe (3/80).

Guardian General Saints set about a rebuilding process through the efforts of Ambris (75) and Jerron John who added 126 for the third wicket. The stand ended at 208/3 when Ambris for the seventh time in as many innings was dismissed LBW, this time by the spin of Nurlon Williams. He batted 125 minutes faced 72 balls and struck 10 fours.

Romel Currency (48) added a further 82 with John before suffering the ignominy of being dismissed hitwicket to pacer Shane Roberts two short of a half century.

John was finally LBW to Williams (2/106) at 335/6 but his team easily went on to claim first innings points. He batted 204 minutes faced 131 balls and struck eight fours.