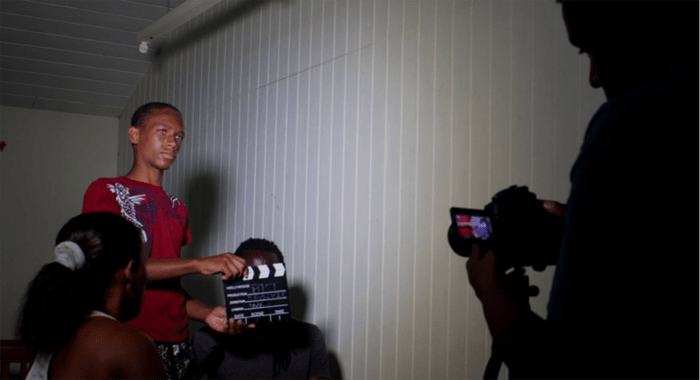 A standing-room only crowd watched the premiere last week of “Reclaiming Paget Farm: Looking Back. Moving Forward”, a three-part documentary film about Paget Farm, a fishing village in southern Bequia.

The documentary is the culmination of work created by 12 new filmmakers who participated in an intensive, 12-week course in Bequia with Skylarc Pictures.

All the filming, interviewing, sound and editing were done by people who three months before had not so much as held a video camera.

The executive producers are Jessica Jaja and Cabral LARC Trotman.

“What they produced in that time was extraordinary: A passionate, detailed, informative and highly professional story of rich culture and heritage, common social problems, environmental issues and an attempt to find new ways forward for this diverse community to survive and thrive,” a press statement said.

Through personal accounts of the treasures and culture that have all but disappeared, it shows the rich history of the people of Paget Farm before the airport was built.

At that time, fishing, boat building and agriculture were all mainstays in the community. Fresh food was plentiful and available to everyone. Whaling was not only the pride of the village, but also the event that brought everyone together.

We see children playing on the beach that was lost to the airport and the sense of togetherness that was ever present. Tender interviews with the elders tell viewers a tale of community spirit, and a sense of loss.

The second chapter, “Rising from the Ashes”, made by Anthony Sargeant, Kirk Ollivierre and Jessica King, focuses on the many social, economic and environmental challenges faced by the people of Paget Farm today.

Teenage pregnancy, pollution and the state of the roads were key areas that the film touched on in a way that was sensitive, enlightening and thought provoking.

Compassionate interviews with teen mother regarding their struggle and overcoming their situation, were excellently portrayed.

This chapter not only exposed these realities but also the possibility of overcoming them by showing local residents seeking success through hard times. Positive initiatives, like the availability of fresh water through a solar-powered desalination plant, were highlighted along side the true craftsmanship and fishing culture rich to the area.

“When Love is King”, the third and final chapter, made by Brinsley Ollivierre, Colin Peters, Jason Simmons and Moriah Alves, explores grassroots initiatives to build a future the people of Paget Farm want for their community.

Creating a community garden together to grow their own food and reinstating and investing in the rich fishing industry were two of the suggestions for a self-sufficient future.

Having a clean and tidy environment, one they and their children can to be proud of, was an overriding theme. Reintroducing skills from the past, ensuring trades are passed down through the generations, establishing a creative hub to rejuvenate the area, were all steps to reclaim Paget Farm.

The chapter took a ground-breaking approach by calling for shift in mentality to achieve these aims.

Jessica Jaja, Executive Producer, was very proud of the filmmakers, “We decided to take a new approach to addressing social issues, all while helping Bequians of all ages and backgrounds develop new skills. It was a big ask, but the end result was so powerful,” she said.

Each film chapter was followed by a lively question and answer session, bringing the audience into the discussion and offering inspirational and often provocative insights from the floor.

Throughout the film, uplifting snippets of J Gould’s renditions of an old whaling song and “Paget Farm, We are the Champions” were incorporated.