The OAS report’s inescapable call: Let the petitions be heard! 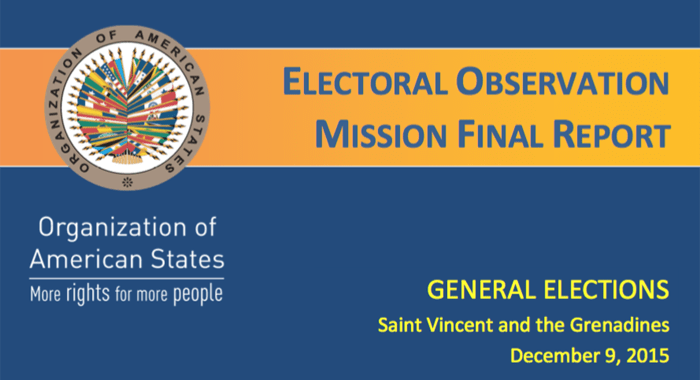 Almost half a year after the fact, the OAS final report on the December 2015 general elections in St. Vincent has finally arrived. It is couched in diplomatic language throughout but in one regard, it speaks clearly: reasonable (and honest) readers will acknowledge that, above anything else, its findings demonstrate why the NDP’s election petitions should be heard in court.

The fundamental feature of the on-going post-election impasse is that the incumbent government is sitting on a one-seat majority, which seat the opposition contends was stolen, along with another. Accordingly, the NDP has filed election petitions to have their claims heard in court.

That argument was not accepted by the court and the petitions are set to be heard on May 27. In response, the government side appears determined to make another procedural application at that time to have the petitions thrown out.

A rational court, concerned about the public interest, should refuse any such revised procedural application.

For the sake of the supporting argument, let’s simplify things a little. Suppose the opposition was only claiming that one seat had been stolen. Philosophically, the government is in an untenable position, right from the start. There is a non-frivolous claim that one seat was stolen, and the other side claims that the seat was won. The outcome of these opposing claims determines the outcome of the general elections. (The other possibility is of a draw in the number of votes, with obvious implications).
The question has therefore to be asked: if there is a non-frivolous case which could go one way or the other, what justifies the existing situation, wherein the incumbent party has simply remained in place?

To put this argument another way: if the government had instead “won” by two seats, and the opposition was claiming that only one seat was “stolen”, then the incumbent government’s life could proceed with no existential questions hanging overhead; they could simply settle for a net win of one clear seat, which would legitimately allow them to remain in office. The opposition could still claim a stolen seat, but (on the face of it) that would not affect the substantive outcome.

But that’s not the case here. The opposition’s claim of two stolen seats raises fundamental questions about the legitimacy of the government — and into this context, the report of the 13-strong OAS observer mission has landed with a bang.

In its executive summary, the report notes the “historically high” voter participation rate of 74 per cent (typically taken as an indicator of voters’ appetite for change); a data point that bears reiterating.

In places, the report’s language is impressive in its dry circumspection: suggestions that the government systematically used state resources for campaigning becomes a note by the observer mission of “a perception of limited differentiation between the state and the governing party in terms of the use of resources during the campaign“. Some of the content was ambiguous (such as a reference to an analysis by a Caribbean pollster, which analysis was not disclosed in its entirety to the public), and some of it was simply half-baked: the report’s language in the matter of the independence of the office of the Supervisor of Elections, especially, is a disappointing failure of nerve and willpower. According to the report, the office of the supervisor of elections at the time of the election was “a dependency” of the Office of the Prime Minister. In plain English, the prime minister was the SOE’s boss. By definition therefore, the office could have no claim of independence — and the OAS should have clearly stated this logically obvious conclusion, rather than babbling about “the critical need for the public to be reassured that the staff operate in an independent and non-partisan manner which is devoid of any perception of political interference“.

Despite these weaknesses, three findings stand out in relation to the disputed Central Leeward constituency. The report clearly states that ballot boxes in the constituency were not properly sealed and therefore there was no certainty that “tampering had not taken place“.

The second finding was that of ballots without the constitutionally-required stamps and signatures, and that the “repeated appeals and objections by NDP agents” to view the relevant counterfoils (not the ballots) were “ignored by the Returning Officer“.

The third finding is direct and disturbing. Under the heading “Partiality of the Returning Officer“, the report notes that “the bias of the Returning Officer towards the ULP candidate and agents was clear. During the period witnessed by the OAS Observers, the RO routinely ignored attempts by the NDP agents to gain his attention, responded to their concerns or objections in a dismissive or exasperated fashion, or complained that they were wasting his time. On the other hand, concerns voiced by ULP agents were immediately addressed and in one particular instance converted by the Returning Officer into a new instruction for the counting process. It was notable that the instruction was revoked only after a lead ULP agent agreed that it should be“.

Any citizen concerned with freedom, democracy and the right to self-determination should be alarmed by these findings. A clear and present danger to our democracy has been disclosed by this OAS report; furthermore, their findings are consistent with and support the evidence that the NDP has already compiled for the benefit of the court. It goes without saying that any Justice worth his or her salt should be convinced, on reading this report, that there is a case to be heard in the court of law. Democracy must be upheld; the law must not only be done, it must be seen to be done. The government’s application to throw out the petitions should not succeed.

5 replies on “The OAS report’s inescapable call: Let the petitions be heard!”