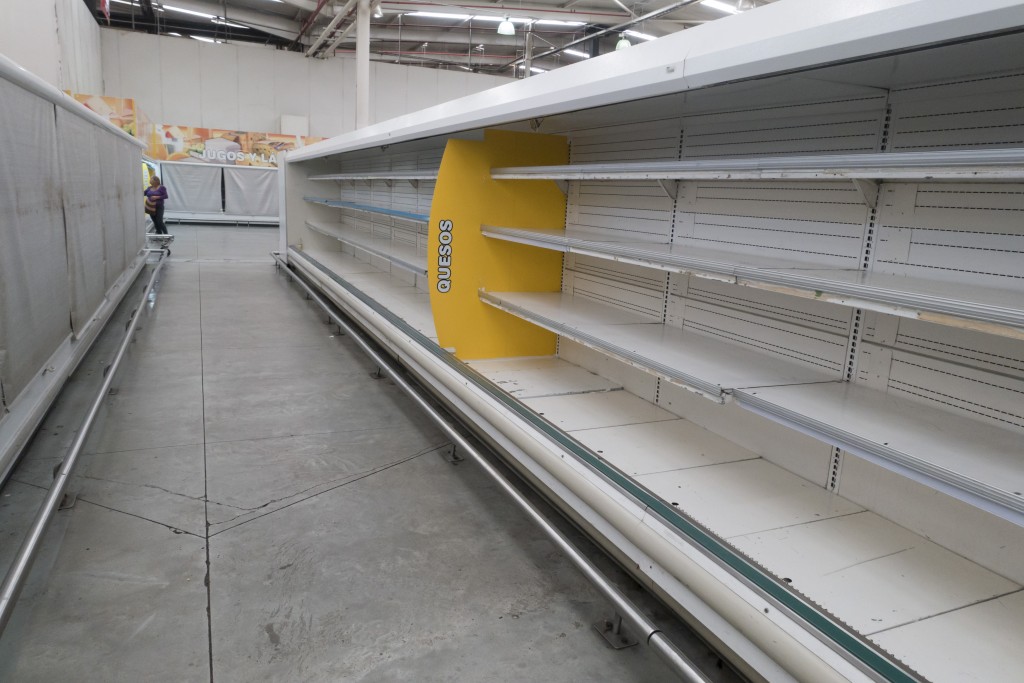 A Vincentian student in Venezuela says the government of St. Vincent and the Grenadines should act now to remove its nationals from the South American nation, which is in the throes of political turmoil that is seeing severe shortages of basic food and medicine.

The student believes that things would only get worse as the opposition attempts to oust President Nicolas Maduro from office amidst 700 per cent inflation and rampant crime.

The call by the Vincentian student in an interview with iWitness News on Monday came days after a house in which a number of female Vincentian and other international students live was robbed at gunpoint on the weekend.

The student told iWitness News that while it is not the first time that Vincentian students in Venezuela were robbed at gunpoint, the latest crime seemed targeted.

“Our requirement as students is food. Access to food and medicine, it is almost like zero. And if we can’t self sustain, if we can’t eat, it makes no sense,” the student told iWitness News on condition of anonymity.

“I am talking about staples, anything you can think of right now. Rice, sugar — any basic food you can talk about. You name a food, you cannot get it. Detergent, things like deodorant and toothpaste, you can’t get here either,” the student said.

Flour might come once in a month in a smaller state and someone might be able to get flour. But in a bigger state, even if it does arrive, it might not be noticeable because of the larger population.

“The eggs have gone up to a ridiculous price of 2,000 bolivars just for 12 eggs and our stipend is 4,000 bolivars a month,” the student told iWitness News, adding that the official exchange range is US$1 to 10 bolivars.

“A kilo of chicken, whether it’s chicken wing or chicken breast or just drumstick is about 2,400 [bolivars]. A bottle of Pepsi or Coke or any carbonated drink or anything like that is 650 bolivars; juice is a round 700, 800.”

“The stipend is equivalent to US$4. I calculated it by the current black market rate because that is what the stores use for consumer prices, because in order for the stores to import stuff, they have to buy US dollars on the black market and they have to price the stuff on that exchange rate.”

The student said that it is not true that Venezuelans have resorted to eating domestic animals such as dogs and cats, as has been claimed on social media.

But what is true, the student also told iWitness News, it that there has been “no medicine in Venezuela” since 2014.

“I am talking about the basics. Even paracetamol, painkillers — basic, basic first aid medicine you cannot get them in Venezuela. Cold medicine, vitamins, vitamin C tablets — things like that, you cannot get them here. God forbid something happens to one of us and we have to end up in the hospital. It would be a very sad situation,” the student said.

Regarding security in the South American nation, the student said that when they went to Venezuela they knew that it “wasn’t a safe place.

“We knew that up front but we have never been under any oppression or any attack or targeted for any reason since we are here.”

He, however, said that in 2014 Vincentian students were also held at gunpoint in their homes and robbed of their laptop computers and other items.

“Nothing ever came out of it and the students went on with their studies. … Last weekend, we had another problem where students were robbed in their homes again,” the student said, adding that there were 12 female international students, including six Vincentians, in the house.

“Now that Venezuela has entered this type of crisis, it would have been a targeted situation. It is a normal thing in Venezuela for somebody to break into a home and rob it. That is normal. But the situation that is present in Venezuela where people are going hungry, they need money to buy stuff because stuff is getting very expensive, they are at a point where they are going to seek out the persons who they think have money and stuff. So if you are a foreigner, the Venezuelans know you are a foreigner, it is possible that they will attack you,” the student said.

There was a case a few weeks ago where assailants shot and killed a German man near an airport after demanding money from him, the student told iWitness News.

Amidst the escalating security situation, the students’ only means of contacting persons outside of Venezuela is through voice over internet protocols such as Skype, WhatsApp and Viber.

The student said that with the push by the opposition to remove Maduro from office, things are heating up

“There is riot in Caracas every single Wednesday. [On] the last two Wednesdays, there was a riot in Caracas. The 26th of this month, they are going to have another marching in Caracas, but it is really a riot where the opposition is trying to mess with the government.”

The Vincentian embassy in Caracas is exploring possibilities for the students, the student said.

“Personally, the situation has not escalated to how it seems in the media. They had a lot of riots in 2014. It was scarier in 2014. I’m not saying that the country will not get to that point. It is heading there once again. And, with inflation at 700 per cent, personally, I think that our government should do all that they can to get the Vincentian students here out of here and send them to other universities,” the student said.

“Our biggest fear down here is food. The authorities know. There are certain things I don’t even want to say. There has been a scarcity of food and medicine and we cannot go on like this. It’s just to get a bachelor’s degree and you are sacrificing all that you have just to do it. It’s not easy at all under the circumstance. Now, I know there are other economies in the world and they are going through problems also, but Venezuela is at a point where it has reached its peak. But things are not nice here. They are not nice,” the student said.