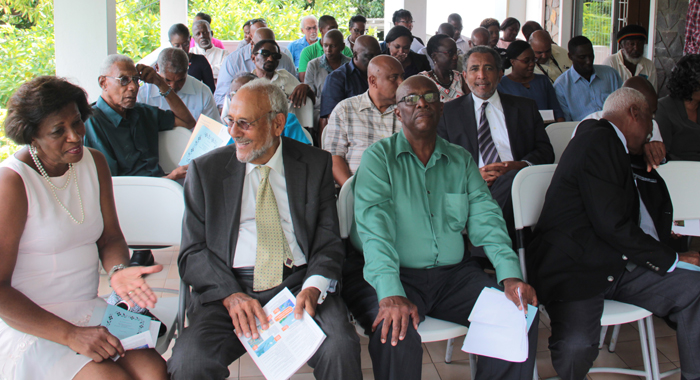 Guest at the event in Kingstown to celebrate the inauguration of Taiwan’s first woman president, Tsai Ing-wen(IWN photo)

St. Vincent and the Grenadines has welcomed the return of the pro-independence Democratic Progressive Party (DPP) to office in Taiwan.

Chair of the DPP, Tsai Ing-wen was sworn in last week Friday as that Asian nation’s first woman president, the first female leader of a Chinese majority nation.

She comes to office after the two-term, eight-year tenure of President Ma Ying-jeou of the nationalist, Kuomintang.

He said he and Tsai have exchanged letters since she was elected on Jan. 16.

Gonsalves further said that when he and other Taiwan allies in the region met with Ma earlier this year, he spoke with the then Taiwan leader about Tsai.

“And everything that I have heard is fantastic and I expect the kind of real deep relations which existed between ourselves when the DPP was in charge of the country between 2000 and 2008,” Gonsalves said.

“I expect that level. That is not to say that the level with President Ma was not good, but I think one can reasonably say that our relationship with the DPP was in fact extraordinary,” Gonsalves said, adding that he is supposed to visit Taiwan in October.

“President Tsai and her administration can rely on this prime minister and the government and people of St. Vincent and the Grenadines for continued solidarity and to further strengthen our excellent relations. I wish her all the best. There is magnificence about this lady and I look forward, when I meet her, to invite her not too long afterwards, to visit us here in St. Vincent and the Grenadines so we’ll all see her in flesh,” Gonsalves said.

Meanwhile, Leader of the Opposition Arnhim Eustace said he was happy to hear Tsai say that relationship between Taiwan and SVG will continue to grow.

He said that the two main political parties in SVG are at one in their support for Taiwan.

“I’ve said before that if there’s one thing we don’t quarrel about, is Taiwan.”

He noted the 35 years of diplomatic relations between Taiwan and SVG.

“And I believe there is no other mission here that has the same type of general relationship with our population as you have with Taiwan,” Eustace said.

He said the contribution of Taiwan to the economy and culture of SVG is very important and meaningful.

“And I think our population recognizes that. And, therefore, to some extent, you are treated differently from other nations that are here in St. Vincent and the Grenadines. There is an atmosphere of the personal, as distinct from simply the diplomatic,” he said and attributed this to the type of relationship that has developed over the past 35 years.

“I want to express my appreciation to you, Mr. Ambassador, and all the previous ambassadors who worked here in St. Vincent and the Grenadines, and the contributions they have made,” Eustace said.

Addressing the luncheon, Taiwan’s Ambassador to SVG, Baushuan Ger, said that in terms of foreign policy, Tsai has stressed that as a member of the global community, Taiwan is willing to participate in international cooperation efforts, sharing benefits and shouldering responsibilities with our partners from around the world.

He said that in her letters to convey gratitude to Governor General Sir Frederick Ballantyne and Gonsalves after the election, Tsai emphasized that SVG and Taiwan share a strong commitment towards building stronger and closer political, economic and cultural relations.

“Therefore, we are very sure that under President Tsai’s administration, the ties between our two countries will be further strengthened,” the diplomat said.

Ger said that SVG has always been an unwavering ally to Taiwan over the past 35 years.

“You have been strenuously outspoken in support of Taiwan’s bid to the United Nations, its specialized agencies and many other multilateral institutions. We are deeply grateful for this camaraderie.

“The bonds between our two countries have grown to the level of genuine brethren. Taiwan has always been proud to be a close partner in the process of national development of our two countries. We help each other and we learn from each other.   One of the proofs is that, with a special passion and love for this country, many of our colleagues at the Embassy and the Technical Mission served and come back to serve again,” Ger told the gathering.

One reply on “St. Vincent welcomes return of pro-independence party to office in Taiwan”