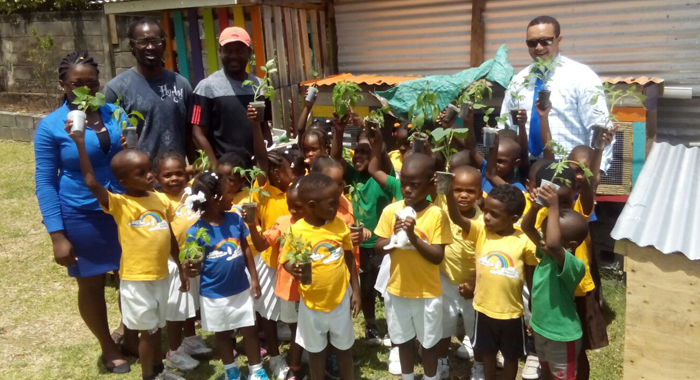 Students of Rainbow Unique Pre-School their teachers and GTC officials at the launch.

The Grassroot Tennis Club (GTC) continues to make their contribution to the development of the youth, beyond the court and tennis.

The club has launched its Pets, Plants And Pre-School Project, whose main objective is to get children more in-tune with their environment, inspiring them to grow what they eat and eating what they grow.

The project was launched at Rainbow Unique Pre-School at Montrose, a preschool whose model gives a perfect head start in life, GTC said.

“I got the general idea from my brother Chester on his ‘Agriculture Off the Grid’ programme and I’m just putting it in motion now, and who better to involve than those who would chart our future, the leaders of tomorrow?” Connell said.

He said the club intends to give 25 pre-schools throughout the land two rabbits, two fowls and various vegetable plants.

“They will see the plants grow and reap the produce and witness how the pets make and take care of their young. They will also see how the waste from the pets can be used to fertilise the plants, and the circle of life comes alive,” Connell said.

He said the launch was very exciting, and much of the children’s attention was focused on “Herbie”, a little 3-week-old rabbit.

The rabbit is from the most recent litter to be born at GTC.

“We see what’s happening in oil-rich Venezuela. So clearly, it’s not what you have but how you manage it,” Connell said.

“If we are able to reach 1000 little minds throughout the land, I think we can inject the mindset of supporting local, eating what you grow and growing what you eat. The mindset of ‘foreign is better’ must be erased since we as a people really don’t know the procedure the imported food takes from farm to fridge and the chemicals that are added to both meat and vegetables that we just gobble down, convince ourselves that it’s so good and accept it as healthy but they are silent killers and we seem least concerned”

As the pets reproduce at GTC and the club will distribute them to pre-school throughout St. Vincent.

It will also give the children at the pre-schools a sense of responsibility to ensure the pets and plants stay alive.

The heads of the pre-school can then decide what they, in turn, do when the pets reproduce.

They can allow the children to have a pair to carry home and the education process continues, Connell said, adding that GTC has a few other projects in the pipeline all geared at helping children make informed decisions.