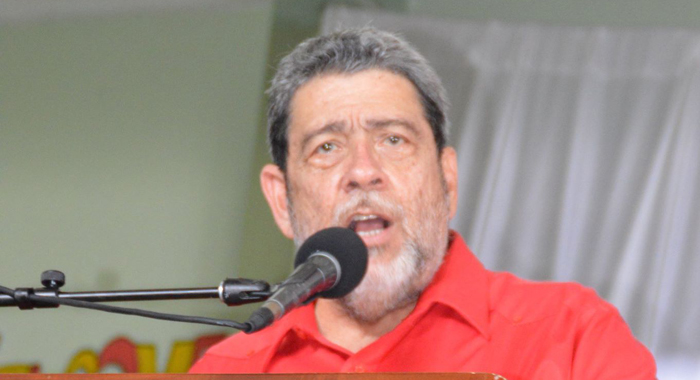 Prime Minister Ralph Gonsalves on Sunday assured supporters of his Unity Labour Party (ULP) that he is in good health, just over two months before he turns 70.

Gonsalves told the party’s 22nd national convention that on April 29 he did a complete medical, adding he does this every six months.

His comments about his health came as he spoke about the need for succession planning in the party, which he has led to four consecutive electoral victories, the last of which was the December 2015 general elections, which the main opposition New Democratic Party (ULP) is contending in court was stolen.

“My [blood] sugar is alright, my [blood] pressure is fine, my heart and my lungs [in] are in order,” Gonsalves said.

“The bones ain’t as supple as they used to be, but, after all, I am going to be 70 years old in the month of August,” said Gonsalves who has suffered a number foot or ankle injuries over the last few years.

On May 14, as he spoke at the funeral of slain police officer Giovanni Charles, Gonsalves told mourners that if they see him wincing, it is because he has injured his left hand.

He, however, did not elaborate.

Gonsalves told Sunday’s convention that not because his health is relatively good means he should be irresponsible with him.

He said he doesn’t eat mutton, beef or pork anymore because they are high in uric acid.

He said mushrooms and asparagus, which he also likes, also have a lot of uric acid.

“So I have to know at this age, what I could eat and what I can’t eat,” he said.

Gonsalves told the convention that he was talking about succession not because he is not up to continuing, physically.

“But the party has to refresh itself and renew itself with personnel, and ideas and policies at every level,” he said, adding that this is what the party has been doing since 2005, when it was re-elected for a second term.

Gonsalves noted that Deputy Prime Minister, Sir Louis Straker, is a few years older than him.

He further said he does not know if Member of Parliament (MP) for North Windward, Montgomery Daniel, who has been in office since 2001, wants to run again in 2020.

Just think of it. One of then youngsters who you’ll select to succeed me, imagine them leading the party in 2020 in the election. And I am still around, God willing, to help, and you have one of those old, I ain’t going say the word, whether it’s Leacock or Friday, coming up against our bright, energetic youngsters?” he said in reference to the vice-presidents of the NDP.

“They will be completely swamped,” Gonsalves said.