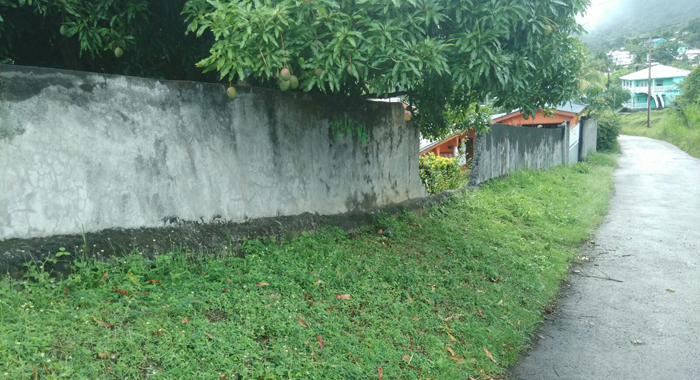 The area in Twenty Hill where the body of a man and a crashed car was found Tuesday night.

Police were midmorning Wednesday trying to determine the identity of a man who was found dead near a vehicle, PB419, in Twenty Hill, a small community along the road to Penniston in South Leeward more than 12 hours earlier.

Police say that the victim, a male, was shot in the head.

The man, who one source said looks to be in his late 20s or early 30s, was discovered by a motorist from a nearby community.

iWitness News was reliably informed that the motorist, who was travelling toward the Vermont area around 10 p.m., was stopped in a community near Twenty Hill by a motorist driving towards Kingstown.

The motorist travelling towards Twenty Hill was told that there seemed to have been an accident and someone was on the ground as if they were dead or badly injured.

The occupants of the vehicle relaying the information were described as too scared to check out the situation. Additionally, they were on a time-sensitive journey.

The motorist who had received the information decided to go in that direction to see if they could help.

While on the way to Twenty Hill, the motorist someone and communicated the information to them. The person advised the motorists to be careful, adding that two masked men had just gone in that direction.

The motorist continued in the direction where the “injured” person was said to have been.

On getting to the crown of Twenty Hill, the motorist is said to have used the high beams on his vehicle to illuminate the scene.

iWitness News was reliably informed that the motorist immediately concluded that the person was dead, and in light of the information they had received about the masked persons, immediately left the scene.

The motorist communicated the information to the person who had told them about the masked man and asked that the police be called.

When the police arrived, they met a man dead, with a bullet wound to the head.

Residents of Twenty Hill later said they heard a number of gunshots in the area around 10 p.m.