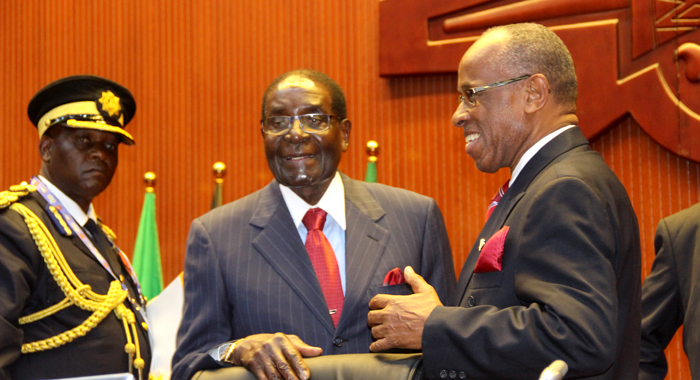 PORT MORESBY, Papua New Guinea (CMC) — The Caribbean Tuesday called on the African, Caribbean and Pacific (ACP) group to re-examine its role and function, 41 years after it was formed.

St. Vincent and the Grenadines Foreign Affairs Minister and Deputy Prime Minister, Sir Louis Straker, speaking on behalf of the Caribbean region, posed a number of questions that he said must be answered if the ACP is to plan effectively for the future.

The call for examination comes as leaders discuss the relationship between the ACP and the European Union after the Cotonou Agreement ends in 2020.

Sir Louis noted that when the ACP was established in Guyana in 1975, its focus was on poverty eradication, promotion of sustainable development, intra-ACP solidarity and cooperation and giving collective voice to ACP member states on global issues, in particular in the relationship with the then European Economic Community.

“Today, as we meet to consider our future as a group, we need to pause to consider which global, regional and other events occurring since our establishment shape the reality within which we seek to chart a new course for ourselves,” Sir Louis said, noting that during the 41 years since the formation of the ACP, there have been changes in the global political landscape, including the end of the Cold War.

Sir Louis also noted advances in information communication technology, adding that this has made the world smaller.

He said the 79-member ACP must answer questions about how these changes have affected its original objectives and how it adjusts.

“It is the answer to these fundamental questions which must determine the outcome of our discussions at this summit,” Sir Louis said.

The two-day summit is being held under the theme “Repositioning the ACP Group to Respond to the Challenges of Sustainable Development.”

Leaders have identified subthemes relating to sustainable development for ACP people; enhancing the role of the ACP in global governance for development; and peace, security and stability as essentials for development.

Sir Louis asked the leaders to compare the theme and sub-themes to the original objectives of the Georgetown Agreement, which brought the ACP into effect.

“Interestingly, they do not differ significantly though new challenges and realities are now taken on board,” Straker said, noting that among these new realities are the global climate change accord reached last December in Paris and the Post-2015 Development Agenda and the Sustainable Development Goals.

“While we in the Caribbean are immeasurably proud of the fact that all of us, with the exception of Haiti, have now graduated into the ranks of the middle-income countries, this comes with its own special challenges, especially when our structural vulnerabilities as small island developing states are taken into account.”

He said in this context the things that must also be taken into account include the shift from primary commodity production and sales as a sustainable economic approach, global trade liberalisation under the auspices of the WTO and emerging financial superpowers, including Brazil, Russia, India, China, and South Africa (BRICS).

Other factors, Sir Louis said, are increasing number of middle-income developing countries and the increasing physical and economic vulnerabilities of small-island and low-lying developing states.

“These are underpinned by new global and regional security threats and arrangements. A fundamental shift in global, regional and national planning has taken place in recognition of the fact that social and economic development cannot take place in an environment in which citizens security is not assured.

He told the summit that if ACP leaders are to plan effectively for the future, they must challenge themselves by answering six pointed questions, including whether they have the political will to continue “in this family” post 2020.

Sir Louis also asked the leaders whether they have the commitment to learn from the past and make the ACP an organisation that can truly and effectively contribute to the economic and social development of its people.

“Are we prepared to take more concerted and sustained action to support each other within the framework of the ACP group and contribute more significantly to our own economic development through south-south cooperation,” he said.

Sir Louis challenged leaders to decide whether they are prepared to stride into the world stage and explore new development cooperation opportunities while deepening and solidifying those that the ACP already have.

“Are we prepared to focus on the delivery of results, of substance — rather than nice sounding resolutions, mandates and declaration and the pomp that surrounds them?”

The St. Vincent and the Grenadines politician then had a final question: “Where do we go from here?”

He said that the ACP must rededicate itself to its original, but adjusted, objectives.

“We have to pledge that we will exercise the political will to make changes which are necessary and implement actions that are required.

“We must pledge to move beyond the rhetoric to results-based action. We must agree to take into account each other’s peculiarities, vulnerabilities and special needs to move forward in solidarity in support of the interest of all — so that each of us can feel that there is something in a further ACP for us and no region feel undermined or marginalised,” Sir Louis said.

The two-day meeting on the Final Report of the Eminent Persons Group (EPG), chaired by former President of Nigeria Chief Olusegun Obasanjo and included former Guyana president Bharrat Jagdeo, on the future of the Group.

The EPG which was formed in 2013, has held consultations in all six ACP regions with various strata of society, and conducted in-depth research, culminating in a number of recommendations for reform, in order to reorient the ACP Group to deliver more effectively on the development ambitions of its member states.