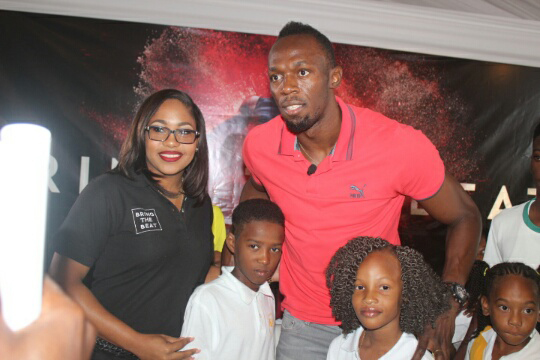 Vincentian students Kareem Davis and Zaronique Forbes were among children from the Caribbean who interviewed the world’s fastest man, Usain Bolt.

Davis and Forbes posed questions to Bolt, an Olympic sprint champion and Digicel ambassador, during a live one-hour television broadcast in Jamaica this week.

Seven-year-old Forbes, a Grade 2 student at the Kingstown Preparatory School, asked Bolt “What motivates you to run so fast?”

The sprint king replied: “Because I want to be the best. I want to be as great as I possibly can; so I train hard and it motivates me to go out there and to do my best.”

Forbes was followed by 9-year-old Davis, also a student of the Kingstown Preparatory School.

The Grade 4 athlete, who had the word “BOLT” as a part of his haircut, asked Bolt, “When you are finished running a race, why do you do this sign?” Then proceeded to illustrate Bolt’s unique move of drawing back his hand as if shooting an arrow.

Bolt laughed and responded: “That’s my signature move and people enjoy seeing me do it anytime I’m finished.”

Bolt simultaneously broke out into the move then said to Davis, “I think I do it better than you, though,” as the other children laughed and applauded.

The other children at the event asked questions about Bolt’s vehicles, fellow athletes, his likes, his fears and number of girlfriends — “only one”.

Davis and Forbes said that they were very excited to meet Bolt, and to be able to interact with him.

“I felt good. I wasn’t nervous. I was excited and I wanted to give him a hug,” Forbes commented.

Davis said that he was impressed with Bolt’s answer to his question.

“He gave a good answer. It was nice meeting him and talking to him.”

The youngsters also presented Bolt with gifts. Forbes gave him a postcard that she designed and a replica of the St. Vincent parrot. Davis presented him with a St. Vincent and the Grenadines bandana.

Davis and Forbes said they were extremely grateful to Digicel for giving them the opportunity to meet Bolt, who is currently preparing for what he indicated would be his final Olympic games.

Bolt is the world and Olympic record holder in the 100 and 200-metre sprints, and also anchors the Jamaican 4×100 metres relay team.

The Digicel Bring the Beat campaign aims to highlight and support the Caribbean region’s athletes participating in the Olympics, which is slated to kick off in about six weeks.

Bolt is among the Digital ambassadors who are promoting the campaign, which also includes a song from Trinidad and Tobago’s soca star, Machel Montano.