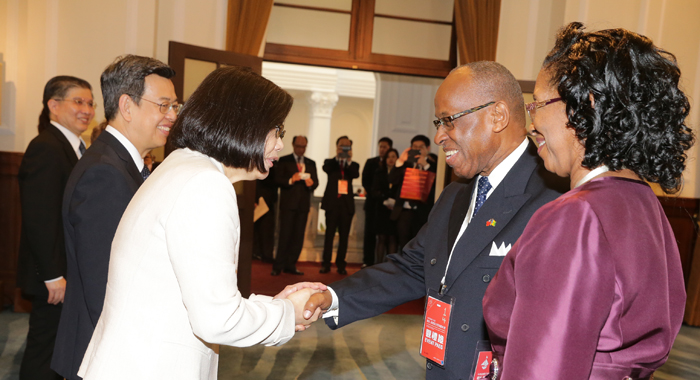 Deputy Prime Minister and Minister of Foreign Sir Louis Straker led the St. Vincent and the Grenadines (SVG) delegation that attended the inauguration of Taiwan’s first female president, Tsai Ing-wen in Taipei on May 20.

Sir Louis and Tsai held bilateral talks on May 21.

During the meeting, Sir Louis relayed a congratulatory message to Tsai on behalf of the government and people of SVG.

Noting that both countries will this year mark 35 years of diplomatic relations, Sir Louis expressed appreciation for the co-operation, adding that it benefits both countries. He further stressed that SVG is fully committed to the continual collaboration with Taiwan.

Tsai welcomed the delegation led by Sir Louis and congratulated him on returning to politics since last December.

She said Taiwan appreciates the solidarity and unwavering support rendered by the Vincentian people and their government over the years, especially in the realm of Taiwan’s participation of international organisations.

Tsai said she is delighted to see that both countries share a strong commitment towards building stronger and closer political, economic and cultural relations. She promised that under her administration, the ties between the two countries will be further strengthened.

The SVG delegation that visited Taiwan from May 18 to 22 included Lady Lynda Straker, Minister of Health, Wellness and the Environment Sen. Luke Browne, and Parliamentary Secretary in the Minister of Education, National Reconciliation and Ecclesiastical Affairs, Sen. Debroah Charles.