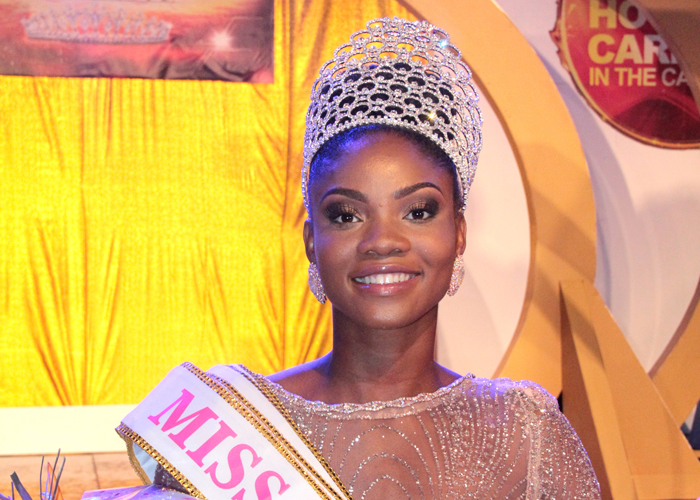 Miss SVG 2016 Nikianna Williamsfoudn out her identity had been stolen when she applied for a Vincentian passport. (IWN photo)

With the Miss SVG 2016 crown firmly planted on her head, Nikianna Williams — Miss Flow, allowed herself to say who she thought could have been seated on that throne instead of her.

“I must say now that I can let the cat out of the bag. Entering the show, I thought that Shannique Alexander was my biggest competitor,” the 22-year-old beauty told reporters after her crowning at Victoria Park amidst sheeting rain early Sunday morning.

Contestants appeared in alphabetic order, making Alexander contestant #1 and Williams as contestant #8. They both had very vocal supporters towards the front of the stage.

Williams, who lives in Lowman Leeward but emphasises her Diamonds origin, defeated Alexander and six other contestants to emerge winner of the pageant.

Other Results (No contribution to winnings):

On her way to her coronation, Williams bagged the Swimwear, Evening Wear, and Interview segments of the show and also secured the crown jewel: an EC$80,000 university scholarship. (Scroll for interview questions and responses)

Alexander was not even her closest rival.

It was Jeanetta Richards — Miss Jergens, who was First Runner-up after a consistently high performance, while Anya Frederick — Miss Agricultural Input Warehouse, was Second runner-up.

Zenna Lewis — Miss Lotto, won the Best Talent category of the show, with her “It’s a Vincy Thing: Message from Below”, which “captures typical Vincentian customs and cultures” and poked fun at a number of current affairs issues.

Among those were generally deeply-divisive topics, such as the results of the December 2015 general elections, which are being contested in the courts.

Lewis, who appeared as the devil, said she had come to say that she doesn’t want any more Vincentians in hell.

“Because, alyo definitely too thief,” she said to laughter, adding that Vincentians steal things that no one else wants to.

“The other day, one thief a soca artiste,” she said in an apparent reference to the alleged abduction of a soca artiste in St. Vincent earlier this year.

“A next one thief a ballot box. And another one thief a whole election gone with it,” she said to thunderous laughter.

But the contestant who emerged winner of the nation’s most popular beauty pageant was in disbelieve about her victory.

“Miss SVG 2016 feels like she is dreaming. I am excited but at the same time I feel as if I am living a dream. I must say thank you to everyone who has helped me. I am still in shock!”

Asked why she was shocked and if she did not expect to win, Williams said:

“I expected to win because I’ve worked extremely hard but it’s just like — I don’t know. I feel like I’m sleeping and I’m living a dream.”

She said she had to diet and exercise rigorously as she prepared for the show.

“I have so many cuts and bruises because of my talent training but I think that it all paid off and tonight I came out triumphant and I am very happy and proud of myself.”

Williams said her talent piece was showing how racism exists. The former history students said and she wanted to do this because it is something that really breaks her heart.

In the Evening Wear category of the show, Williams also swayed the judges with her Kimon Baptise creation, “Dawn of a New Day”

“It is giving tribute to cancer survivors and those who have died of cancer — breast cancer in particular,” Williams told reporters.

Williams will now represent St. Vincent and the Grenadines at the Miss Carival pageant on July 1, where contestants from Anguilla, Barbados, Dominica, Grenada, St. Kitts and Nevis, St. Lucia, Montserrat, Trinidad and Tobago and Venezuela will vie for the crown.

Williams also had some advice for persons interested in participating in the Miss SVG pageant.

She said she aspires to be a child psychologist and plans to pursue studies in psychology.

Question 1: “In your biography, you mentioned your fascination with Nelson Mandela. Which of his qualities impacted you most and why?

Response: “One of the things that Nelson Mandela said was, courage is not the absence of fear but triumph over it; the great man is not he who is not afraid, but he who conquers that fear. I believe that Nelson Mandela exemplified courage during his lifetime. He fought for the rights and freedoms of blacks in South Africa against the system of Apartheid. And I must say that he is a courageous man. This is definitely the quality that I love, that I admire in Nelson Mandela as I stand here tonight, courageously.”

Question 2: “In your opinion, what are some of the contributing factors towards gun violence and why?”

Response: “I must say that I do not believe that anyone was born violent. Therefore, I believe that parents should take on the responsibility of educating our children […] I believe this is the main reason, if parents do not take the time out to educate their children then they would be partaking in violent activities. I addition to this, I believe that the increase in unemployment is another contributing factor. I believe that once our children, our young persons they are not employed, that they find things to do, such as getting involved in gangs. And I must say that I take this opportunity also to call out to those who are involved in gun violence and I must say that you do not gain anything from doing such and this is not only impacting you, it is impacting St. Vincent and the Grenadines and in a negative light.”