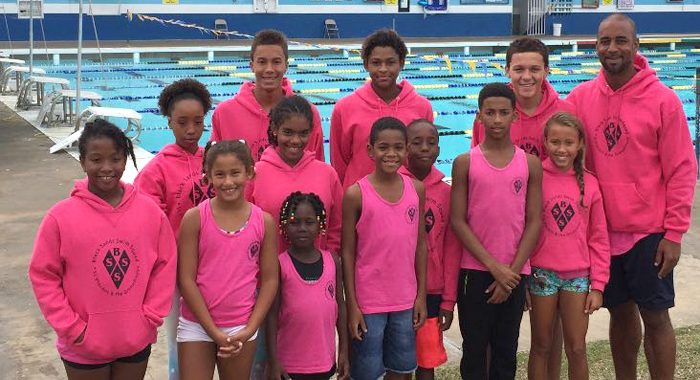 A flurry of medals were won by the Black Sands swimmers over the three days of competition which attracted more than 19 swimming clubs from throughout the region.

The awards didn’t stop at just medals for Black Sands. The club finished the competition claiming the trophy for the top OECS club and also took the third place trophy for the club with the overall highest points.

Shné Joachim destroyed the competition in her age group, winning 4 gold, 1 silver and 1 bronze medal whilst also being award the trophy for top girl in her 15 years and over age group.

Following suit was her brother, Alex Joachim who swam courageously against some of the region’s top swimmers in his age group. Alex came away with 5 silver and 5 bronze medals and numerous personal best times.

Youngest sister Jamie Joachim wasn’t to be left out of the medal flurry. Jamie swam herself to a well-earned silver medal in the 50-metre butterfly and also came back with 5 personal best swims.

Swimming for the very first time in Barbados, 9-year-old Eltonté Leonard shocked the competition with his fantastic swimming ability. Leonard proudly swam himself onto the medal podium winning gold medals in both the 50 and 100 freestyle. Swimming in the 9 to 10 years age group, he went on to be awarded 3 bronze medals, bringing home 5 medals in total.

Swimming in the same age group was teammate Jayson Sandy. Sandy raced well against Leonard throughout the competition, especially in the exciting 50 metre breaststroke race that had the spectators on their feet. Sandy and Leonard, along with Bajan swimmer Omari Sealy were neck and neck for the entire race, with Sandy touching first for gold, Sealy stealing silver and Leonard settled for bronze. Leonard’s two sisters 13-year-old Eltonia and 5-year-old Eltonique Leonard also swam themselves to personal best times at the event.

Ria Adams swam personal best times in six out of eight of her events and rose to the challenge in the 200 metres breaststroke and battled her way to a well earned silver medal.

Caitlin Polious and Sofia Barnwell made up the team of 13 swimmers for Black Sands. Both girls, swimming for the first time in Barbados’s 50-metre pool, managed to swim themselves to great personal best times.

Coach Kyle Dougan said the results were absolutely fantastic. He reffered to his club’s first appearance at the competition over five years ago and expressed great satisfaction in seeing such a great improvement in his swimmers and their results.

Black Sands Swim Squad is going from strength to strength and becoming one of the leading competitive swimming clubs within the Caribbean region. The club will be holding team try-outs at Shrewsbury House from 9 a.m. to 12 noon every Saturday throughout June and July and Coach Kyle is welcoming ALL people interested to come and try-out the sport. He can be contacted on 784-532-9463 or at [email protected]