Forty-one years later, the future of the ACP comes under scrutiny 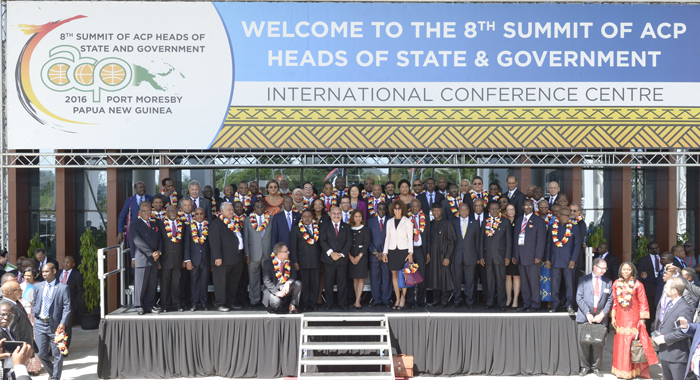 ACP leaders at their May 31 to June 1 summit in Port Moresby. (Photo: ACP)

PORT MORESBY, Papua New Guinea (CMC) — Forty-one years after its formation, questions are being asked about the relevance of the 79-member African, Caribbean and Pacific Group of States (ACP) whose main task was to achieve sustainable development and integration into the global economy.

The ACP, which came into being following the signing of the Georgetown Agreement in Guyana in 1975, was also tasked with making poverty reduction a matter of priority and establishing a new, fairer, and more equitable world order.

But while all but one of the 15-member CARICOM countries have been graduated to middle-income countries — Haiti being the exception, questions about the relevance of the grouping made up of former European colonies are surfacing.

During the just concluded 8th ACP Summit here, heads of states and government asked pointed questions about the continued relevance of the organization.

Zimbabwe’s President Robert Mugabe, one of the longest-serving head of state in the ACP, told the opening ceremony of the two-day conference that the core task of the summit is to re-define clearly “the group’s core principles and align its objectives and, even, perhaps, arch a new framework altogether”.

Mugabe said the vision of the ACP in 1975 was to enhance the political identity of the group, to enable it to act and speak with a united voice in all international fora, and to contribute towards the realisation of a new, fairer, and more equitable world economic order.

“The question that confronts us today is: ‘Have we lived up to that vision as an ACP family, and what impact has the ACP-EU (European Union) partnership had on our well-being?’” the 92-year-old African leader said.

Mugabe said the summit should commit itself to gradually weaning the ACP from the development aid.

“Our regions are endowed with a vast array of natural resources — flora and fauna, diamonds, gold, platinum, oil, marine life, land and highly educated citizens, yet we remain on the margins of the value chains. We cannot continue to be spectators while our primary commodities are driving an economic boom in the North and West,” the Zimbabwean leader said.

St. Vincent and the Grenadines Deputy Prime, Sir Louis Straker, speaking on behalf of the CARICOM grouping, noted that when the ACP was established in 1975, its focus was on poverty eradication, promotion of sustainable development, intra-ACP solidarity and cooperation and giving collective voice to ACP member states on global issues, in particular in the relationship with the then European Economic Community.

“Today, as we meet to consider our future as a group, we need to pause to consider which global, regional and other events occurring since our establishment shape the reality within which we seek to chart a new course for ourselves,” said Sir Louis, who is also his country’s Minister ofForeign Affairs.

He said that during the 41 years since the ACP’s formation there have been changes in the global political landscape, including the end of the Cold War. In addition, advances in information communication technology have made the world smaller.

He said the 79-member ACP must answer questions about how these changes have affected its original objectives and how it adjusts.

“It is the answer to these fundamental questions which must determine the outcome of our discussions at this summit,” Sir Louis said of the summit that was held under the theme “Repositioning the ACP Group to Respond to the Challenges of Sustainable Development.”

The European Union Commissioner, Neven Mimica, also spoke of the need to re-define the ACP.

“Looking forward, our starting point is that the relationship should become a true political partnership, based on common interest, away from the traditional donor-recipient relationship, ranging from global issues, to political, peace and security, trade and economic, developmental and migration issues,” he said.

Among the highlights of the two-day summit was the adoption of a report by the Eminent Persons Group (EPG), headed by former Nigerian president Chief Olusegun Obasanjo and including former Guyana president Bharrat Jagdeo.

Papua New Guinea Prime Minister Peter O’Neill told reporters that the summit accepted the EPG report and acknowledged the importance and need of the ACP Group to reorient itself as an international organization that is relevant, responsive and active in its role in the international arena.

“The proposals are virtually to try and make ACP relevant, play a bit more active role in pursuing its interest in the international arena, reshaping the secretariat itself so that it can be more appropriate in meeting the needs and objectives of each of the member’s states,” O’Neill said.

He said the recommendations are quite detailed and the leaders wanted to analyse them thoroughly.

O’Neill had earlier warned his colleagues that “if the APC is to be relevant and responsive to its members given the rapid rate of globalisation, it requires a major restructure in order to change its core business to one that is trade and investment oriented”.

According to ACP officials, the report will be discussed by the various regions and at the ACP Council of Minister before yearend. The hope is to implement the recommendations before 2020 and before the next summit in 2018.

O’Neill said the leaders are trying to reposition the ACP for future development that will be able to benefit each member nation.

Guyana’s Foreign Minister and Vice-President, Carl Greenidge, told the Caribbean Media Corporation (CMC) the summit here was “interesting and effective” and insisted that the grouping is as relevant now as it was in 1975.

But he acknowledged that the bloc is at a point where its future is an “issue”.

“These are issues that an international organisation would have to address. I think you are going to find that this was one of the more successful of the summits,” he told CMC, noting that the EPG recommendations is for the ACP to be more focused and to avoid spreading its net too widely.

Greenidge said that people tend to forget that the ACP has many achievements to its credit, including in trade negotiations, where it was able to pool resources against countries such as Uruguay that were “occupying centre stage”.

But he said there is still a long way to go.

“In the future, among the things they are called upon to look at, are issues that more specifically focus them in the area, for example, to do with technology, the question of dialogue, and, of course, the central issues, … matters such as growth and impact of economic growth, technical change on our quality of our lives, the seas and so forth.

“Basically, the future of the ACP lies in its ability to bring the diversity that it represents in a manner that generates synergy as a counter-balancing force in the international community, as a mechanism for bringing the challenging facing developing countries in particular to the fore, for articulating their voice and in the international community throwing their voice so it can be heard, it can be effective, it can be meaningfully structured,” Greenidge told CMC.