Women in ICU after vehicle fire in Kingstown 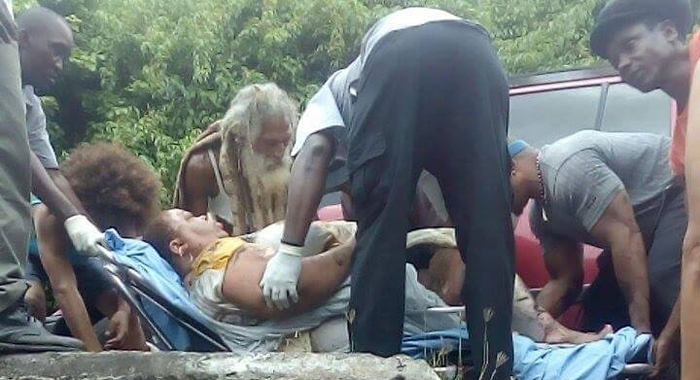 First responders and civilians assist one of the women after they were rescued from the burning vehicle on Tuesday.

Two women were on Wednesday in the Intensive Care Unit of the Milton Cato Memorial Hospital, one day after they were injured while trapped inside a burning vehicle in McKies Hill.

The women have been identified as sisters Cornelia and Lucinda Quashie of Cane End.

A teenaged male was also inside the vehicle.

Information reaching iWitness News is that a fire broke out on the front passenger side and spread to other parts of the vehicle, PM618.

The teenager, who was in the rear seat, was able to jump out, but the two women, both of whom were in the front, could not get out because the doors did not open.

A man who came with a cutlass was able to pry open the window on the driver side of the vehicle and free the women.

The woman who was in the front passenger seat is said to have been more severely burnt than the driver.