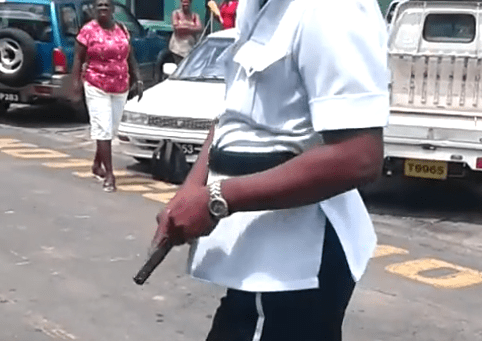 A police officer drew his gun as two students fought in Kingstown on Friday.

A police officer on duty in Kingstown drew his service pistol in an apparent attempt to break up a fight between two secondary school students on Friday, one of whom is said to have had a knife.

The incident occurred on Halifax Street, between The Inland Revenue Department and the former NCB building, which now houses the Registry.

A witness said that the students engaged in the fight, two boys, seemed to be Form 2 or Form 3 students.

The students were dressed in blue shirts and trousers, but iWitness News was unable to determine what school or institution they are enrolled in.

It is not clear what caused the squabble, but a video of the incident posted on Facebook shows the officer holding one of the students and walking in on a pedestrian crossing towards the other students, who is being held by someone else, seemingly a civilian.

But the student who was being held by the civilian broke free and charged across the street toward the police officer and the other student.

It is not clear if the police officer released the boy he was hold or if the boy pulled free as the other student charged across the street.

But one of the students can be seen chasing the other as the police pulled out his firearm, which was concealed under his black and white uniform.

At the same time, a police officer in civilian clothes moves into the frame and runs after the boys.

The un-uniformed police officer touches his colleague on the arm, seeming telling him to put the firearm away as the officer who was not in uniform pulls the boys apart.

The police officer with the drawn firearm, a semi-automatic pistol, is seen cocking the weapon twice as his colleague holds one of the boys.

A uniformed officer from the Special Services Unit (SSU) — a tactical squad – and a civilian held the other boys, until the other uniformed officer, still with his gun in hand, come over and hold him behind the collar and begins walking away.

He then turned back and handed over the boys to the SSU office while he sheathed the gun before walking away with the student.

Voices on the video, obtained separately by iWitness News, can be heard saying that one of the boys had pulled out a knife.