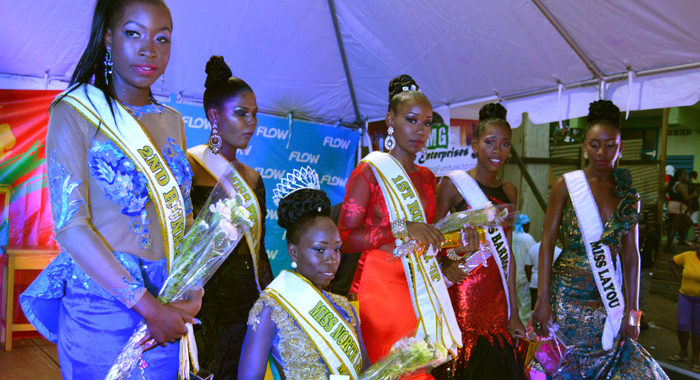 The Chateaubelair and Vermont delegates shared the winnings in the four categories of the Miss Leeward Pageant that determined Friday’s winner.

Lampkin and Parsons shared equally among the “beauty” and “brain” winnings. Lampkin won the Swimwear and Interview categories, while the Evening Wear and Talent segments went to Parsons.

The calypso is about a promising young lady – Suzie — who became addicted to cocaine at age 14.

She “never got her life back on track again” and, by the time she was 20 — when the calypsonian saw her “standing in the rain” — Suzie was prostituting herself to support her drug habit.

At the end of the song, Parsons said: “Children, if you’re listening, hear me. Listen to your parents carefully. We have too much (sic) Suzies roaming our streets. Suzie’s mother tired to guide her, gave her the best she could have offered, but Suzie never, never honoured her mother’s plea.”

Parson’s winning evening gown was dubbed “Red carnation”. It was a gown made of stretched silk, red chiffon and mesh.

According to the description read on stage, the bodice of the gown was skilfully made “to create a teasing effect on her skin”.

The bottom of the gown is “shaped into a mesmerizing mermaid skirt which hugs her hips perfectly and then glows into a flowerbed of carnation”.

Parsons chose to depict carnation as it “signifies the fascination of a woman and her deep love and affection, which she exudes”.

In the interview segment, Lampkin was asked:

“You stated in your biography that you are an aspiring (sic) lawyer. What kind of lawyer would you want to become, and why?”

She responded: “Upon entering the St. Vincent and the Grenadines community college, I chose to study paralegal law. Now, two years into my studying, my love for the law field has grown immensely, moreover, my love for family law. I grow (sic) up in a large and closely knitted (sic) family and this has played the most important part in my decision making of becoming a family lawyer. I would like to have a hands-on approach on dealing with cases of broken families and families who are in need of the type of assistance that I will be providing and the well-being of any minor child or children will be my main focus, especially on the changes of gender role in our society.”

She gave the following answer: “Curbing the occurrence of domestic violence has to be done with the community effort. Individuals, both male and female, should be sensitive from the start in order that they should know what is domestic abuse, the type of domestic abuse and distinguishing the abusive traits on any individual. This would help to avoid any situation that would potentially be dangerous. Also, cases of domestic violence should be treated more seriously with harsher penalties for persons who are guilty of these crimes.”