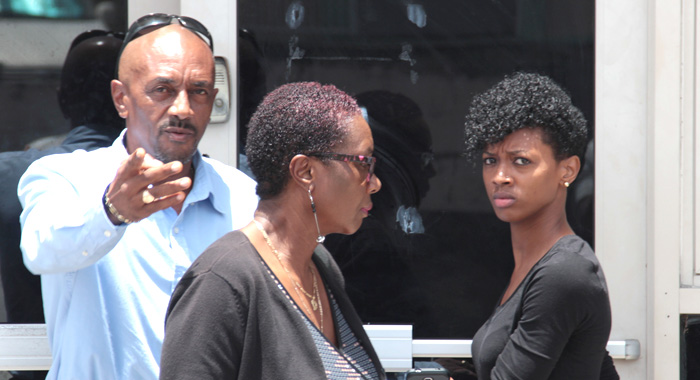 Kimesha Llewellyn, right, and her parents exit the Kingstown Magistrate’s Court after her acquittal on Monday. (IWN photo)

He, however, cautioned the popular makeup artist that his ruling was not an indication that she did not commit the crimes she was accused of.

Pompey told the accused that the acquittal meant that the prosecution failed to prove its case.

The magistrate also advised the virtual complainant, Shepherd of Lower Questelles, that a civil suit against Llewellyn was also an option.

Defence counsel Grant Connel told the court that the case gave insight into the poor state of police investigations in St. Vincent and the Grenadines.

In her testimony, Shepherd told the court that on May 6, 2016, about 6:30 p.m., she and her one-time friend, Kishorn Browne of Cane Hall were walking along the Cane Hall public road (away from Kingstown), when the defendant approached them driving a car, P7732.

The defendant was driving in the direction of Cane Hall and stopped the vehicle and started hurling insults at Shepherd.

Shepherd told the court that Llewellyn referred to her as “trash” and said she and Browne were going to “a whore house”.

The defendant was at some time in the past involved in a relationship with Browne.

Shepherd said that Browne, who was her friend at the time of the alleged incident, rebuked Llewellyn, asking her why she was behaving that way when she had her child in the car.

Shepherd told the court that Llewellyn continued driving toward Cane Hall, then turned the car around (in the direction of Kingstown) and sped toward her.

She said she had to press herself against a wall at the side of the road but the car struck her, resulting in injuries to her left leg and hand.

Shepherd said she lost consciousness for “ten seconds” and when she regained consciousness, Browne was picking her up off the road where she fell.

He called the police and for an ambulance but the ambulance was taking too long to respond so he called a taxi, which took her to the hospital, where she was treated.

Shepherd said she was attended to by an intern doctor who sent her to be x-rayed and told her that her blood pressure was high. The physician wanted to admit her to the hospital but she didn’t agree, Shepherd told the court.

The physician also cleaned her injuries and administered a tetanus injection.

She collected the police medical report forms the following day and took them to the hospital, where another doctor filled them out — because the intern who attended to her was not authorised to complete the forms.

In his cross-examination, defence counsel Grant Connell suggested to Shepherd that Llewellyn’s vehicle was travelling at 15 miles per hour.

She said the vehicle was going much faster than that and further said in response to another question, that she was in the process of getting her driver’s licence.

Connell further suggested to the virtual complainant that Llewellyn had swerved to avoid another vehicle and Shepherd had bruised herself against the wall.

But Shepherd maintained that this was not the case, telling the court that there was no other vehicle on the road at the time, and that her bruises were on her left side, while it was her right side that she pressed against the wall.

The lawyer further said that Shepherd was trying to make things seem worse than they really were because Browne is Llewellyn’s ex-boyfriend and there is bad blood between the two women.

He said that what Shepherd had told the court was blown out of proportion.

Shepherd maintained that this was not the case and when asked why she and Browne were no longer friends, said: “I almost lost my life for him so I ended the friendship.”

When Browne took to the stand, he told the court that he does not know Shepherd “very well” and that he can’t recall the date of the alleged incident.

Asked by prosecutor Station Sergeant of Police Elgin Burgin if he gave the police a statement, Browne asked, “A statement about what?”

He then said that he gave a statement. Asked if the statement was read back to him, Browne asked, “Read back to me before I signed it?”

The magistrate then told the prosecutor that he could make an application to treat Browne as a hostile witness.

But the prosecutor declined and said he had no further questions for Browne and told Browne he could stand down.

As Browne was exiting the dock, the prosecutor said something to the effect that one day Browne might want someone to testify on his behalf.

Defence counsel Connell seemed as if he was about to object but only gestured at the prosecutor.

The case all but fell apart when Corporal Gideon Black of the Criminal Investigation Department took the stand.

He told the court that he, along Corporal 444 James, Shepherd, Connell and Llewellyn visited the scene of the alleged incident on May 10.

He said he took measurements and recorded them on a piece of scrap paper, and the information was later transferred to his pocketbook.

Connell said that the scrap paper on which the police office wrote the measurements, along with the pocket books, should be entered into evidence.

But the prosecution was able to get this evidence in through a statement that Black had written, which included the measurements at the scene.

Black told the court that the road was 15 feet wide, Shepherd fell seven feet from the point of impact, and she saw the vehicle when it was 44 feet away.

During his cross-examination, Black was unable to provide evidence vital to the case.

He was unable to say whether a report was prepared by the police mechanic who inspected Llewellyn’s vehicle after the incident, and the location of photos that were taken of the vehicle.

Black further said that some evidence could only be given by James, who was in South America on official duty.

In the end, Grant made a no case submission, saying that the case was riddled with inconsistencies. He argued that the evidence of the police was inconsistent with that of the virtual complainant.

Connell said the medical report could not have been tendered into evidence because it did not detail any injuries suffered by Shepherd.

He further said that Black’s evidence was at variance with proper policing, noting that, among other things, the cop said he visited the scene a second time to check for a security guard who may have been at a booth at the time of the alleged incident, did not find the person and made no record of the visit nor mentioned it in his statement.

“I know you are at pains when you sit here as magistrate and see this type of policing,” Connell said to Pompey, a retired deputy commissioner of police.

He noted that when asked about the evidence on which he had based the charges, Black referred to his colleague James, who was not available to testify.

Connell further said that the court was unsure whether a doctor had even filled out the medical injury form.

He told the court that there was no prima facie case to answer.

“Except for a few bright lights, this is the state of policing in St. Vincent and the Grenadines,” Connell told the court.

In his response, the prosecutor told the court that he agrees with Connell that the state didn’t prove its case on the dangerous driving charge.

Richards said this may have been the case because the prosecution did not tender a notice of intent to prosecute.

He, however, told the court that on the other charges the prosecution had made out a prima facie case.

The court must take all the evidence before it in its context, Richards said.

He told the court that Shepherd was walking with a friend of Llewellyn’s and Llewellyn came and hurled a barrage of insults at Shepherd.

He said the defendant got angry, drove off and when she returned and met Shepherd and Browne, drove the vehicle into Shepherd.

The magistrate, however, accepted the argument of the defence.

After the hearing, Llewellyn exited the court through the main entry/exit along with her father, Leroy Llewellyn, and her mother.

Mr. Llewellyn alerted his daughter to the presence of journalists taking photographs outside the court.

They re-entered the building, and, along with Browne, left through a side door and left the court precinct inside a vehicle.